Sixty years ago, three Soviet scientists published a paper, in Russian, entitled “Study of electronic emission during the stripping of a layer of high polymer from glass in a vacuum.” They demonstrated that a process called triboluminescence — where relative motion between two contacting surfaces produces visible light — converts mechanical energy into electromagnetic radiation, including X-rays. As often happens in the history of science, this phenomenon lay dormant for over fifty years until 2008 when a group of physicists from the University of California at Los Angeles (UCLA) published an article in Nature entitled “Correlation between nanosecond X-ray flashes and stick-slip friction in peeling tape.”

Like all good entrepreneurs, the researchers filed a provisional patent before publication and assigned the intellectual property to their employer. Three years ago one of the inventors, Carlos Camara, formed a company called Tribogenics to commercialise the metal-polymer technology which they licensed from UCLA. Their small powerful X-ray sources are scalable and can be configured as single point emitters or clustered into flat-panel arrays of X-ray pixels that can be individually addressed. Since the fragile glass tube and high voltages have been eliminated, these X-ray sources are apparently safe to use in any environment. 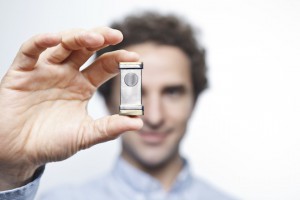 Carlos Camara holds a tiny X-ray emitter
Tribogenics will be applying their X-Change sources to medical care, including therapy — such as low-cost radiation oncology — and diagnostics, where compact array-based imaging is envisaged. An intriguing image on the company’s website illustrates a mock-up of a portable X-ray machine, where a soldier lies in a field while a medic with a laptop computer studies an X-ray of the man’s lower spine.

So how does the technology work? According to the authors, “As the tape peels off, the sticky acrylic adhesive becomes positively charged and the polyethylene roll becomes negatively charged, so that electric fields build up to values that trigger discharges. At a reduced pressure, the discharges accelerate electrons to energies that generate Bremsstrahlung X-rays when they strike the positive side of the tape.” While there are experts like Ken Suslick at the University of Illinois who are skeptical that so much of the mechanical energy can be transformed into X-rays, Camara and his team at Tribogenics are pushing ahead regardless.

It’s an interesting thought that at some stage in the future, an experiment performed with an off-the-shelf roll of Scotch Tape mounted on ball bearings in a vacuum chamber could lead to a miniature X-ray source that will aid in the diagnosis of breast cancer.