A Revolution in X-ray Imaging

Two years ago, we made a bold prediction that in the near future, the majority of X-ray products sold in the market would be based on field emitter technology. Well, the European Society of Radiology opened its annual congress yesterday that allowed the British company Adaptix to give us a glimpse into the future. Their presentation (click here for the video) showed how they plan to transform radiology by bringing low-cost, low-dose three-dimensional (3D) X-ray imaging to the point of care.

Participating in the presentation were CEO Mark Evans, Dr Conrad Dirckx, director of project management and Dr Steve Wells, vice president of technology. They were joined by the company’s medical advisor, Dr Siân Phillips, who is clinical director of radiology and cancer services at Cwm Taf Morgannwg in Wales. The team provided an introduction to their breakthrough technology, gave a demonstration of the system in operation, spoke about clinical applications and then answered more than a dozen questions from the audience. 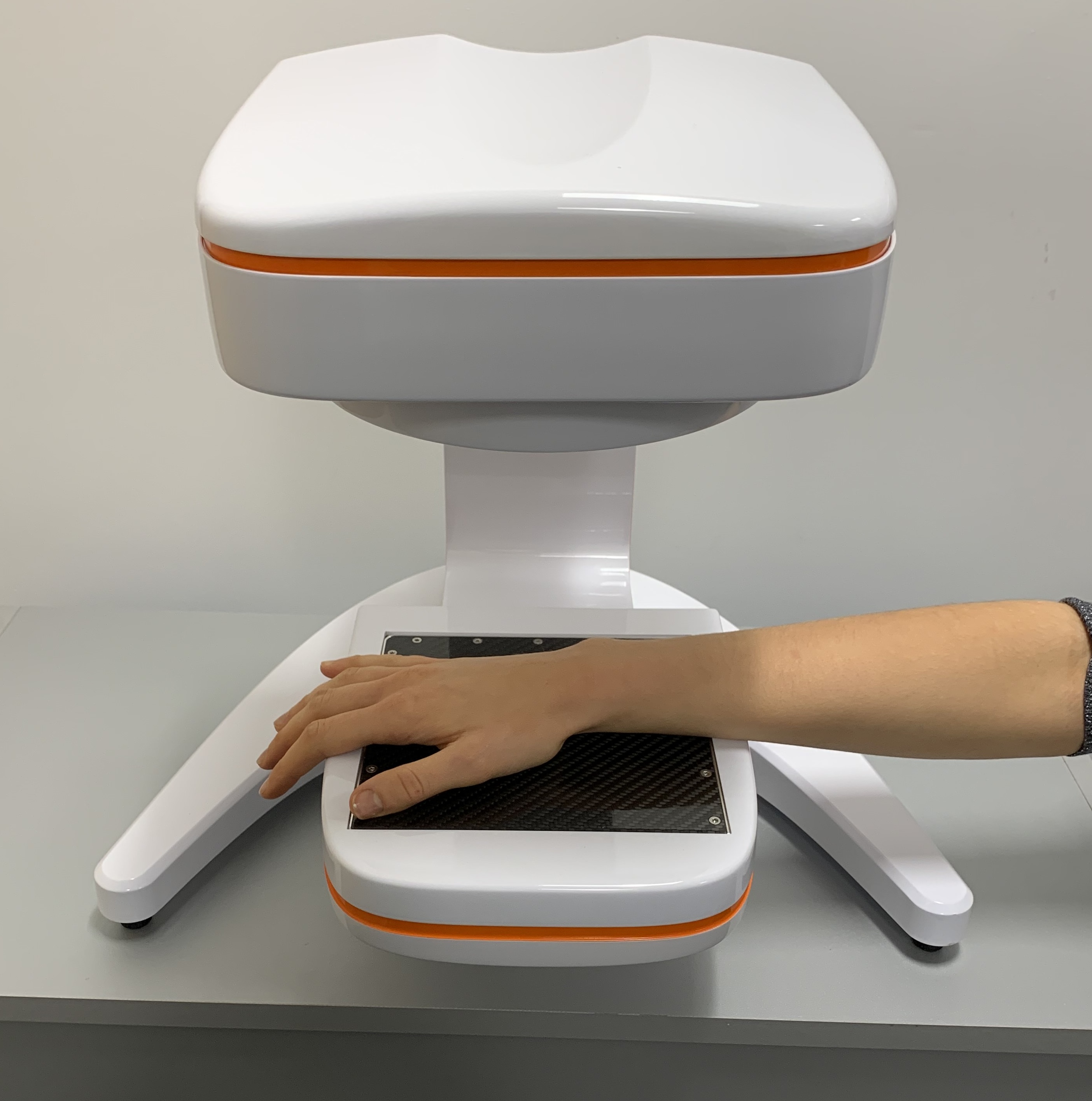 Seen at left (© Adaptix) is the mini C-arm, weighing just 15 kg, that includes the flat-panel X-ray source above, and the flat-panel detector below. In its standard configuration the system can acquire images of the hand or wrist, while the C-arm may be rotated through 90 degrees to enable acquisition of a weight-bearing image of the foot or ankle (seen below). Benefits of such a compact device include its deployment in an orthopaedic office, a fracture clinic, a ski resort, an ambulance or on the sidelines of a soccer pitch.

Instead of just a single X-ray source in a traditional system, the Adaptix flat-panel source (FPS) is made of a rectangular array of cold cathode field emitters sealed into the unit with a power supply. Each of the field emitters – there are 45 in the system above – generate a cone of X-rays that overlap one another, while the emitters may be individually controlled and fired in rapid sequence.

A proprietary tomosynthesis algorithm, developed in collaboration with mathematicians at Oxford University, utilises the overlapping X-ray cones to generate 3D images that can be viewed as a video animation seen below (© Adaptix). Benefits of the FPS geometry include: no movement of the X-ray source is required; faster acquisition times; and a reduced source-to-detector distance that results in a lower radiation dose. Adaptix is now on the cusp of launching its revolutionary FPS technology into the marketplace and besides orthopaedics there are other exciting clinical opportunities, including the lungs and digital breast tomosynthesis.