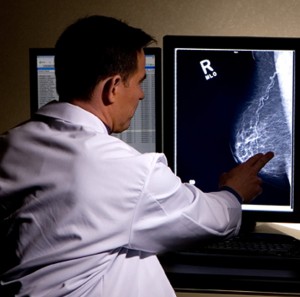 At CapeRay we are motivated by the challenge of developing imaging systems to detect breast cancer that will maximize two statistical measures: sensitivity and specificity. Ideally, our systems should yield 100% sensitivity (the percentage of true positive diagnoses) and 100% specificity (percentage of true negatives). Perhaps unsurprisingly, there is currently no single imaging system on the market that can match these dual targets. But it’s not just the imaging equipment that plays a role. The radiologists who read the images are ultimately the ones who determine sensitivity and specificity.

In the past few months two papers have been published in the American Journal of Roentgenology by the same research group who have explored the question: Are radiologists overconfident in their ability to diagnose breast cancer? In the first paper, 119 community radiologists interpreted 109 mammograms that had previously been classified by experts. The radiologists also rated their confidence in their assessment for each case. Those who rated themselves as expert or above average had a higher positive predictive value (PPV) compared with those radiologists who rated their ability as average or below average.

“Among high-performing individuals, such as competitive athletes, performance is often linked to self-efficacy, which is a generalized belief in one’s ability to succeed in a particular situation,” the authors wrote. “Our study shows that both global self-efficacy and confidence are related to a radiologist’s ability to correctly interpret an individual patient’s mammographic examination.” Self-confidence was thus associated with better accuracy.

In their second paper, the group surveyed 174 radiologists who specialized in breast cancer surveillance. They compared the radiologists’ actual performance with their self-estimated performance on recall rate, false-positives and positive predictive value of biopsy recommendation (PPV2). “We weren’t surprised that radiologists felt their performance was better than their peers — I suspect most people believe they are good at their jobs,” said senior author Diana Miglioretti. “However, we were surprised that radiologists were unable to accurately estimate their false-positive rates and PPV2. These are important measures for evaluating the benefits and harms of mammography. If the false-positive rate is too high, a lot of women are likely getting unnecessary additional workup. And if the PPV2 is too low, a lot of women are likely getting unnecessary biopsies that turn out to be benign.”

So, while self-confidence is a healthy trait for all clinicians, there should always be the motivation for self-improvement. We can all do better.