While there is some uncertainty about the provenance of the term “Aunt Minnie”, it would appear to have been first used by a radiologist called Ben Felson in the 1940s to describe “a case with radiologic findings so specific and compelling that no realistic differential diagnosis exists”. Thus, if the image looks like your Aunt Minnie then it must indeed be your Aunt Minnie! This expression served as the inspiration for a website, launched in 1999, that provides a focal point where the latest news on medical imaging is featured.

Every year since 2000 the editors at AuntMinnie.com have recognized the best of the best in radiology, identifying the people and technologies that have made an important impact. In 2012, breast imaging has dominated the Minnies — as these awards are known — winning 4 of the 14 categories. There is a common thread running through all four awards: finding a better way to detect breast cancer.

Wendie Berg, professor of radiology at the University of Pittsburgh, has won the Most Influential Radiology Researcher award for the second time, building on the prominent role she has played in using modalities such as MRI, ultrasound and positron emission mammography. She has served as the principal investigator on the American College of Radiology Imaging Network (ACRIN) trials, examining the use of new modalities in women with dense tissue. Her article entitled “Detection of breast cancer with addition of annual screening ultrasound or a single screening MRI to mammography in women with elevated breast cancer risk”, published in the Journal of the American Medical Association, was recognized as the Best Scientific Paper of the Year. 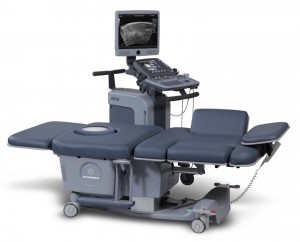 For the third straight year the Minnie for the Hottest Clinical Procedure was awarded to digital breast tomosynthesis (DBT). This is good news for Hologic, the only company that currently has FDA approval for its DBT system that has been able to demonstrate a significant reduction in the recall rate (i.e. fewer false positives).

Perhaps the biggest surprise was the winner of Best New Radiology Device that went to Vancouver-based Ultrasonix Medical for their SonixEmbrace system that is not even on the market yet. SonixEmbrace is an automated breast ultrasound (ABUS) system in which the patient lies face down on a scanning bed while a rotating ultrasound transducer, coupled to the breast through a gel pad, captures 800 high-resolution slices in a 360-degree arc. The regulatory process begins in earnest next year.