Big Data Comes to the Cape

Two chemists from the University of Cape Town (UCT), Kevin Naidoo and Jahansha Ashkani (seen right, © Mail & Guardian), have just published a key article in Scientific Reports, an online open-access journal from the publishers of Nature. Their findings have the potential to pave the way for an early diagnostic tool that could lead to individualised treatment based on the unique genetic expression of cancer cells. The researchers studied the glycosyltransferase (GT) gene expression – the enzymes that build complex carbohydrates – in tumours, extracting their data from a database in The Cancer Genome Atlas (TCGA).

They probed the relationship between the levels of expression for 210 GT genes and six types of cancer by examining the data of 1,893 patients. The cancer types studied were: breast (BRCA); colon (COAD); glioblastoma (GBM); kidney (KIRC); lung (LUSC); and ovarian (OV). A principal component analysis was performed to separate the six cancer types based on the expression of GT genes and, as seen below (© Nature), the first three principal components (PC1 to PC3) successfully segregated the tumours. 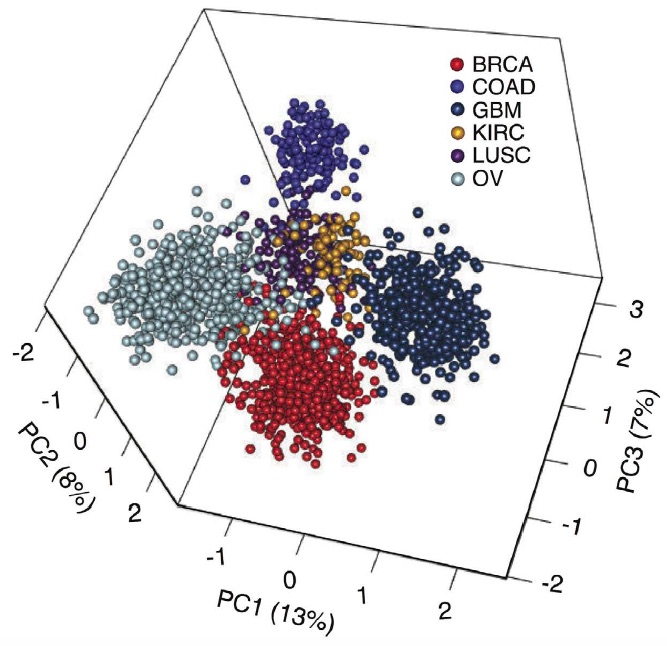 The authors were able to compare their results against existing clinical diagnosis that was available for the breast cancer samples in the TCGA database. When asked if their approach could detect whether a patient might be prone to developing a particularly aggressive form of cancer, Naidoo replied: “Indeed our research does this, and this is, interestingly, the most immediate application of our findings. We can detect the specific subtypes of a cancer and we have shown this for breast cancer. We found, for example, distinct patterns for aggressive types of cancer, such as the commonly termed ‘triple negative’ breast cancer.”

Naidoo acknowledged that this research, which was based on tumour samples from the USA now needs to focus on blood samples of patients gathered here in Cape Town. His collaborators include scientists in human genetics and pathology from the UCT medical school and the Centre for Proteomics and Genomics Research  and they will have to gather a large number of patient samples for their diagnostic tool to have statistical validity. To develop a low-cost method for extracting the signature genes from blood, the team will have to extend genomic technology.

Naidoo was upbeat, concluding: “We would like to see a partnership between computational data analytics laboratories like ours  and clinical and laboratory researchers funded in large cohesive efforts.” As was said in an earlier blog, ex Africa semper aliquid novi, meaning “out of Africa there is always something new”!