It has taken almost a year from initial submission to finally appearing in print but this past weekend a key article was published in the international journal Clinical Imaging. The aim of our study, conducted in April and May 2014, was to test our innovative dual-modality imaging system that integrates full-field digital mammography (FFDM) and automated breast ultrasound (ABUS) in a single platform. Named after the Greek goddess of healing, our Aceso system has been designed to detect breast cancer early in women who have dense breast tissue. The full citation is:

Two industry-standard phantoms were first employed to test Aceso: a Contrast Detail Mammography (CDMAM) phantom endorsed by EUREF, the European Reference Organisation for Quality Assured Breast Screening and Diagnostic Services, was used to evaluate the quality of the FFDM images; and the CIRS 040GSE ultrasound phantom was used to assess the quality of the ABUS images. We also conducted a clinical trial with the approval of the Human Research Ethics Committee at the University of Cape Town. A total of 58 women participated: 51 healthy volunteers with no prior history of breast cancer; and 7 patients referred by the Groote Schuur Hospital breast clinic, of whom 6 had biopsy-proven breast cancer. 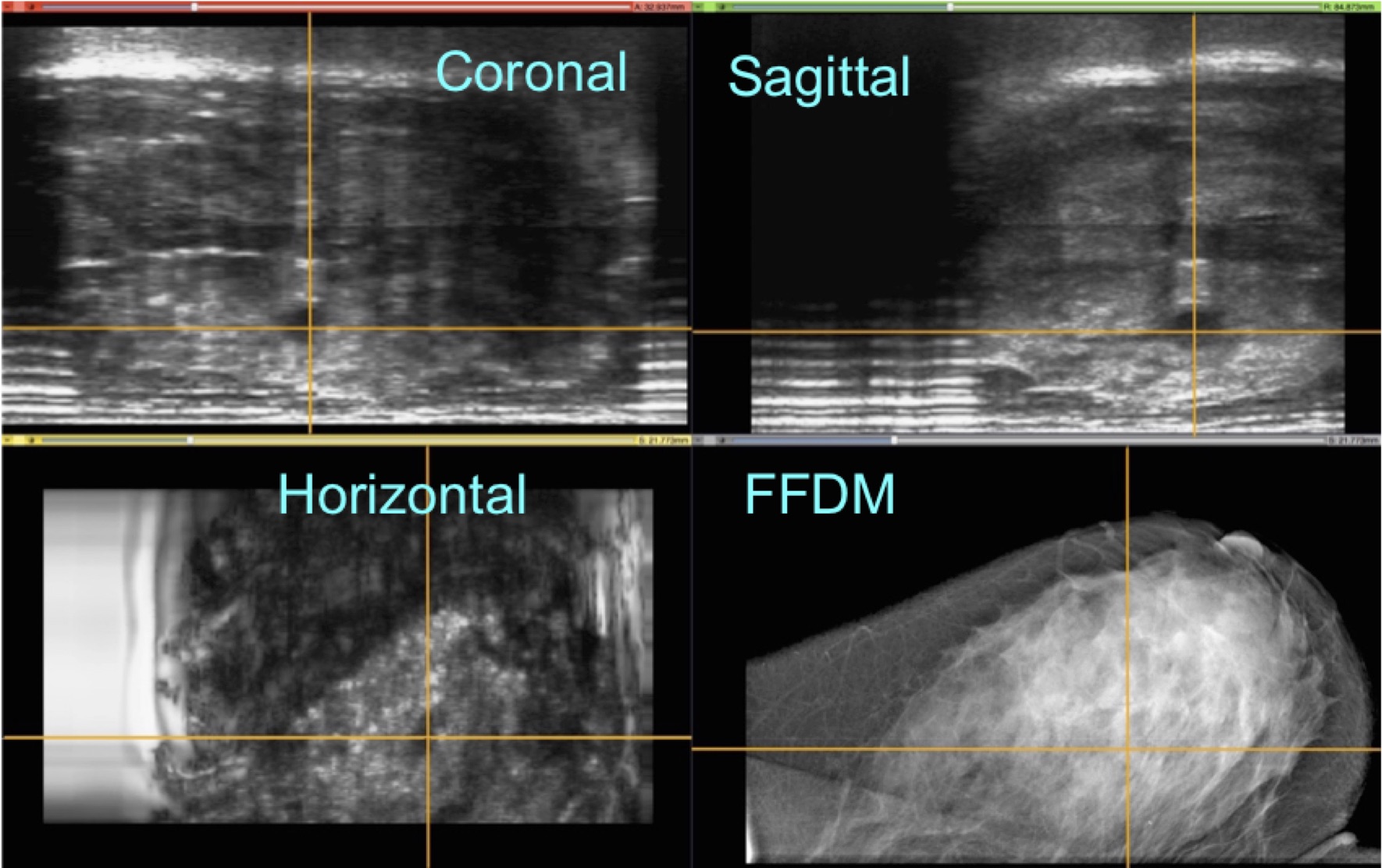 The CDMAM results demonstrated that the FFDM data were judged to be “acceptable” but not quite at the “achievable” level, a finding attributed to the extremely low dose used at the time. The findings with the CIRS phantom showed that the ABUS images had excellent depth penetration of 80mm and adequate axial resolution of 0.5mm, but the resolution in the lateral direction was too coarse, at 2mm. This latter finding was attributed to the element pitch in our off-the-shelf ultrasound probe.

In the clinical trial, our most remarkable finding (seen above left) was in a 42-year-old volunteer who had extremely dense breast tissue: the ABUS modality clearly revealed a lesion – a benign cyst – that was mammographically occult in the FFDM image. We believe this first version of Aceso demonstrated our ability to acquire clinically meaningful images. Aceso 2, with improved quality for both the FFDM and ABUS images, was built and clinically tested in 2015. Watch this space for news of our next important article!