Yesterday the President of the United States went on the offensive at a special high-level meeting convened by the United Nations to address the spread of the Ebola virus. In his speech Barak Obama listed the emergency measures taken by the USA where the Centers for Disease Control and Prevention in Atlanta are mounting the largest international response in their 68-year history. Speaking by video link from his office in Freetown, Ernest Bai Koroma, President of Sierra Leone said, “Our country and its sister republics may be at the frontlines of this fight but we require the heavy aerial and ground support of the world to defeat a disease worse than terrorism.”

The World Health Organisation (WHO) has identified a three-pronged strategy in preventing the spread of Ebola, a haemorrhagic fever that takes its name from the river in the Democratic Republic of Congo where the virus was first discovered in 1976: (1) reduce the risk of wildlife-to-human transmission; (2) reduce the risk of human-to-human transmission; and (3) contain the outbreak by identifying people who may have been in contact with someone infected by Ebola. Health officials have identified the urgent need for a simple tool to detect those who are infected. 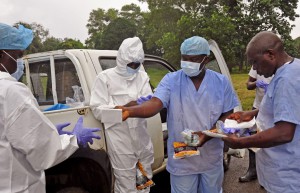 The good news is that two inexpensive and rapid diagnostic test kits will undergo their initial trials in Guinea and Sierra Leone, beginning next month. The gold standard against which these kits will be tested is a molecular test that identifies the Ebola virus genes in blood using polymerase chain reaction (PCR). The companies – Senova from Weimar, Germany and Corgenix from Colorado, USA – have developed diagnostic tests where the health care worker collects a blood sample from a finger prick that is then applied to a test strip. Both medical devices are antibody-based diagnostics that, while not as sensitive as PCR tests, will provide an answer within minutes.

President Obama challenged the world: “If we move fast, it could be the difference between ten, twenty or thirty thousand deaths and hundreds of thousands or a million. This should not be about wrangling and waiting to see who will give what first.” In South Africa, our own Department of Health has just announced its intention to raise a quarter of a billion rand – about $25 million – to coordinate and manage relief assistance in the Ebola-ravaged countries to our north.

It’s reassuring to know that a simple diagnostic device could help to combat this deadly epidemic.