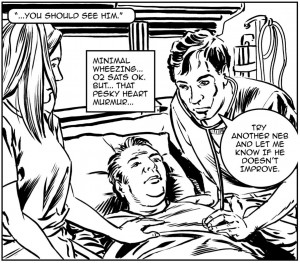 The success of TV shows like House and Grey’s Anatomy, the latter a focus of last week’s blog, shows there’s a hunger among the general public for medical storytelling. One artistic medium that lends itself to telling stories is the comic strip, emerging into popular culture during the 19th century. An illustrator, Ray Rieck, and a physician, Dr Michael J Green, have recently collaborated on a comic strip called “Missed It” that was published in Annals of Internal Medicine. 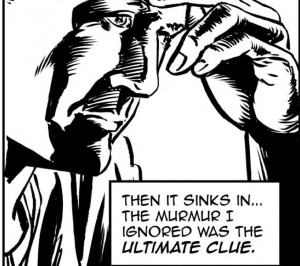 “First time I’ve been published in a medical journal — not something I was ever anticipating” said Rieck. “It all stems from my work with a medical ethicist at Penn State who’s one of the pioneers in a sub-field of medicine that uses comics and graphic novels to aid in doctor/patient understanding.” The basis for the story is a real case that confronted Dr Green twenty years ago when he was an inexperienced intern on night call. 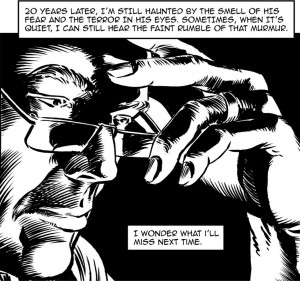 Green is woken at 3:00 am by a fellow registrar who tells him that a patient with chronic obstructive pulmonary disease (COPD) has been admitted to the emergency room. Shaking off his drowsiness, Green makes his way down to the ER, thinking this will be a straightforward case, with the patient simply requiring a nebulizer, steroids and some oxygen. Upon examining the patient, he discovers a heart murmur but the registrar he’s relieving tells him not to worry, “It’s old, documented in the chart.” Green writes the admission order, takes his patient upstairs to the ward, and goes back to bed.

However, all is not well. The nurses call him at 4:30 am and report that the patient is struggling to breathe. Green rushes back to the ward and reviews the notes, discovering that his patient is not a smoker, the chest X-ray looks fine, the nebulizer is not working and concludes that COPD was probably the wrong diagnosis. Before he is able to move his patient to the intensive care unit, the 54-year-old man suffers a massive cardiac arrest and dies. An autopsy confirms the cause of death: pinpoint aortic stenosis. The young doctor is devastated.

“It was a very difficult situation, and it happened a long time ago, but it haunted me for a long time, and I knew it was something I wanted to write about at some point,” Green said. Comics are a powerful way to communicate as this story so graphically illustrates.