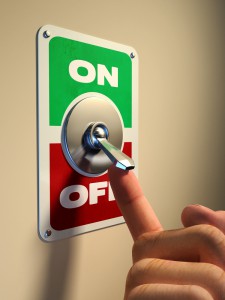 Basic scientists have recently reported the discovery of natural “switches” that play a role in the biology of breast cancer cells. Their research findings have been published in open access journals under the umbrella of the Public Library of Science (PLoS), a ten-year-old initiative of scientists from Stanford and Berkeley, including Harold Varmus who was awarded the 1989 Nobel Prize for his discovery of the cellular origin of retroviral oncogenes.

Australian researchers from Sydney have reported in the latest edition of PloS Biology the discovery of a “genetic switch” that could potentially lead to new treatments for breast cancer. They have shown that a molecule known as ELF5 can turn genes on or off, while it is also possible to manipulate the molecule so that breast cancer cells become more sensitive to anti-oestrogen drugs. Importantly, oestrogen plays a key role — women who have low levels of oestrogen, either because they start menstruating late or begin menopause early, have a lower risk of breast cancer.

According to lead author Chris Ormandy, “ELF5 determines whether cells will respond to oestrogen therapy or not.” Since the molecule is present in all breast cells, triggering the production of milk, the latest discovery could lead to the development of new drugs designed to reduce the amount of ELF5. “This molecule could also have some prognostic or predictive value to guide treatment decisions,” said Ormandy. 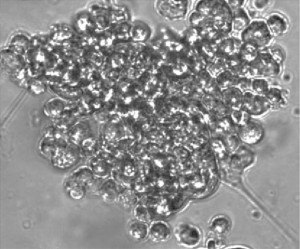 Three-dimensional tumour spheroids. Copyright PLoS.
A group of biomedical engineers at Cornell in upstate New York have discovered a natural switch that controls the body’s inflammatory response and the mechanism by which malignant breast cancer cells use the bloodstream to spread. Led by laboratory head Mike King, they published their paper entitled “Phenotypic switch in blood: effects of pro-inflammatory cytokines on breast cancer cell aggregation and adhesion” in PloS ONE. The investigators constructed a flow chamber that was designed to mimic an inflamed blood vessel wall and investigated the metastatic cascade. The cytokines in the blood constitute a switch that triggers the mechanism used by breast cancer cells to “roll” and then adhere to the blood vessel wall and eventually infiltrate it.

To confirm their results, King and his team used sophisticated 3D tumour spheroids (see image above left) that exhibited a significant increase in interaction between the cancer cells and the blood vessel. The key to fighting metastasis will be to block the roll-and-stick mechanism of cancer cells in the bloodstream, to flick the switch.