Twitter is now a ubiquitous part of our lives, enabling individuals to make their personal thoughts known to all and sundry. It’s how we keep track of what Donald Trump is thinking, whether it’s the devastation wrought by Hurricane Irma or his recent speech at the United Nations. Vinay Prasad is a 34-year-old doctor working in Portland, Oregon who takes to Twitter each day to pass judgment on the latest cancer drug or clinical trial. Although he has a modest number of followers – just 12,000 – his influence is growing, with one commentator describing him as a “swashbuckling crusader for medicine” and another suggesting that “he tends to be cynical and nihilistic.”

Earlier this year Prasad posted a Tweet (seen above) that boldly declared: “The Cochrane review of mammography randomized control trials is a MUST read. No effect on overall mortality.” When one of his followers asked for a link to the report, Prasad suggested she use Google to track it down since the link’s URL was too long. You would have thought that a man familiar with social media would know about tools such as Bitly or Splitter!

Another follower, Jenny Hall, then commented that the report used very old clinical trials and treatment was now different. Prasad shot back, saying that because treatment was better, mammograms were less useful. But Hall persisted, suggesting that mammography equipment was also better, to which there was no response from the man who appears to have an opinion on everything. 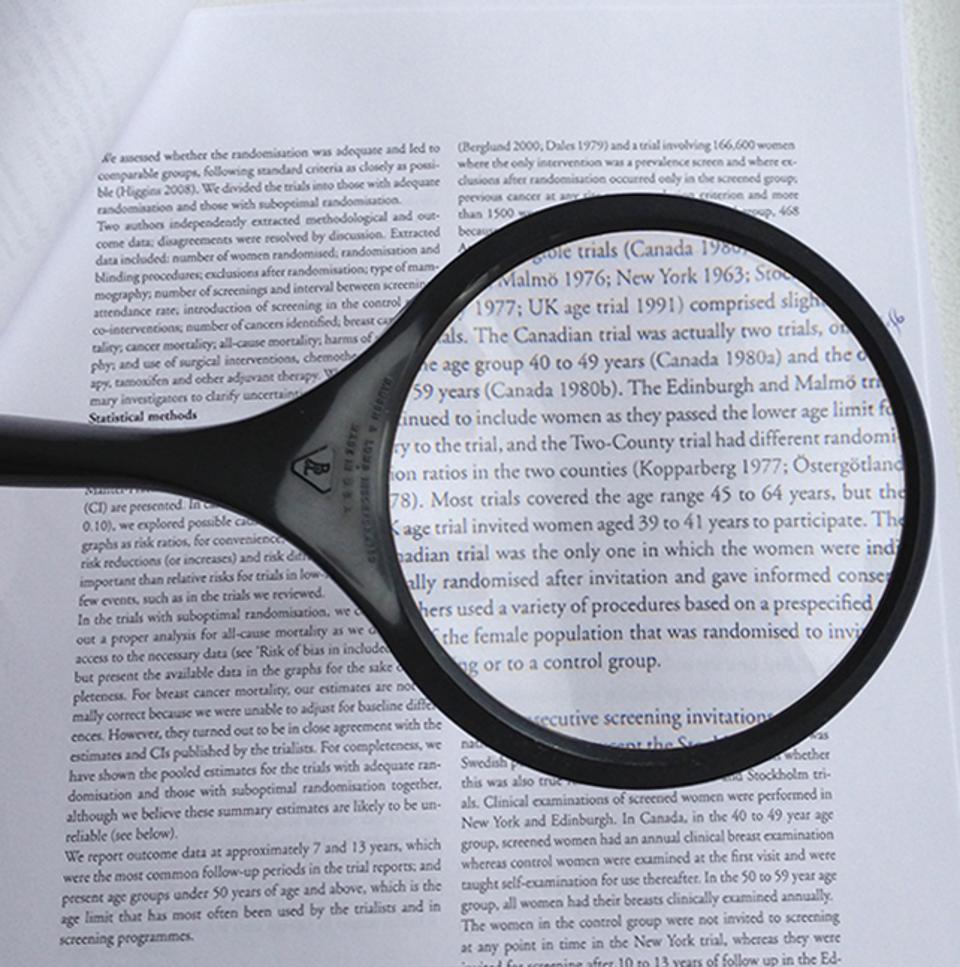 The Cochrane review was published in 2013 by Peter Gøtzsche from Denmark, whose book Mammography Screening: Truth, Lies and Controversy we reviewed five years ago. Writing for Forbes, Elaine Schattner, a physician and journalist, took the time to read the article carefully and commented  “For today, I’ll focus on dates. Recent analyses cite studies carried out during the 1980s, 1970s and 1960s. In other words, researchers are analyzing our grandmothers’ mammograms to inform women’s health and screening decisions today.”

As Schattner pointed out, all but one of the eight studies in the Cochrane review started in 1982 or earlier (see above, © Forbes). However, in the past 35 years the technology underpinning breast cancer screening has undergone significant improvements: mammography has moved from analogue to digital; we have seen the introduction of digital breast tomosynthesis; and automated breast ultrasound has been added for women with dense tissue. In answer to the question posed in the title, the answer is clearly “yes.” Prasad should have read Schattner’s article before posting his Tweet.