E-Cigarettes in Regulatory No Man’s Land

Until a decade ago there was some debate whether smoking increased the risk of breast cancer. However, there is now consensus that active smoking increases the risk and when women stop smoking the risk disappears. Within the past few years, a substitute for smoking, the electronic cigarette or e-cigarette, has appeared on the market. What are e-cigarettes, are they safe and could they have a positive impact on cancer incidence?

An e-cigarette is made up of three parts: a liquid nicotine cartridge at one end, a rechargeable lithium-ion battery at the other with an atomiser in the middle. As the person sucks, the liquid nicotine is vaporised and passes through the mouth into the lungs, while the exhaled water vapour looks similar to smoke. Since there is no tobacco — and therefore no tar — the e-cigarette doesn’t fall under the regulatory frameworks that apply to cigarettes. It is estimated that there will be one million Britons using e-cigarettes in 2013 while the number of users in the USA already exceeds 3.5 million.

Professor John Britton, who heads up the tobacco advisory body for the Royal College of Physicians in the UK, has said: “Nicotine itself is not a particularly hazardous drug. It’s something on a par with the effects you get from caffeine. If all the smokers in Britain stopped smoking cigarettes and started smoking e-cigarettes, we would save 5 million deaths in people who are alive today. It’s a massive potential public health prize.” 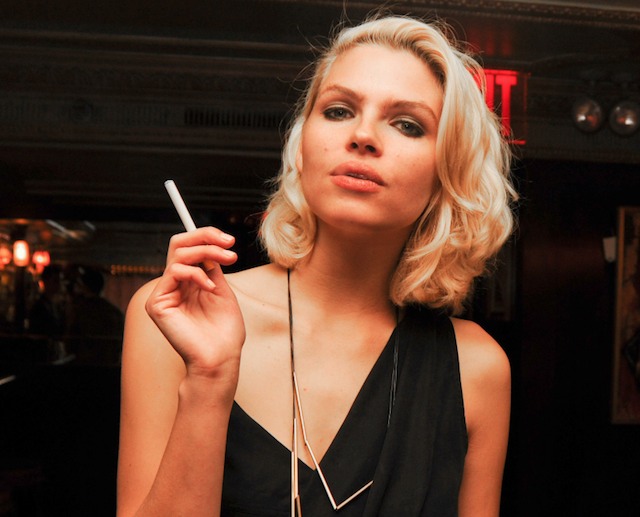 E-cigarettes are cool. Copyright gothamist.com and Owen Kolasinski.
However, not all doctors in the UK share this point of view. Dr Vivienne Nathanson, who represents the British Medical Association, is far more cautious: “It’s going to take some time before we know [whether e-cigarettes are safe] because we need to see them in use and study very carefully what the effects are.” The Food and Drug Administration in the USA is similarly concerned and, although it recently lost a legal challenge by a leading e-cigarette manufacturer, it has made its intentions clear: to regulate nicotine-containing products, including e-cigarettes.

As evident in the PubMed online database, there is a small but growing body of scientific knowledge on e-cigarettes. A comparison of the effects of e-cigarette vapour and cigarette smoke on indoor air quality showed that e-cigarettes produced very few pollutants. However, when the pulmonary system of human volunteers was studied, there were adverse physiological effects. It will no doubt take some time before the full picture emerges.