From Land Mines to Breast Cancer 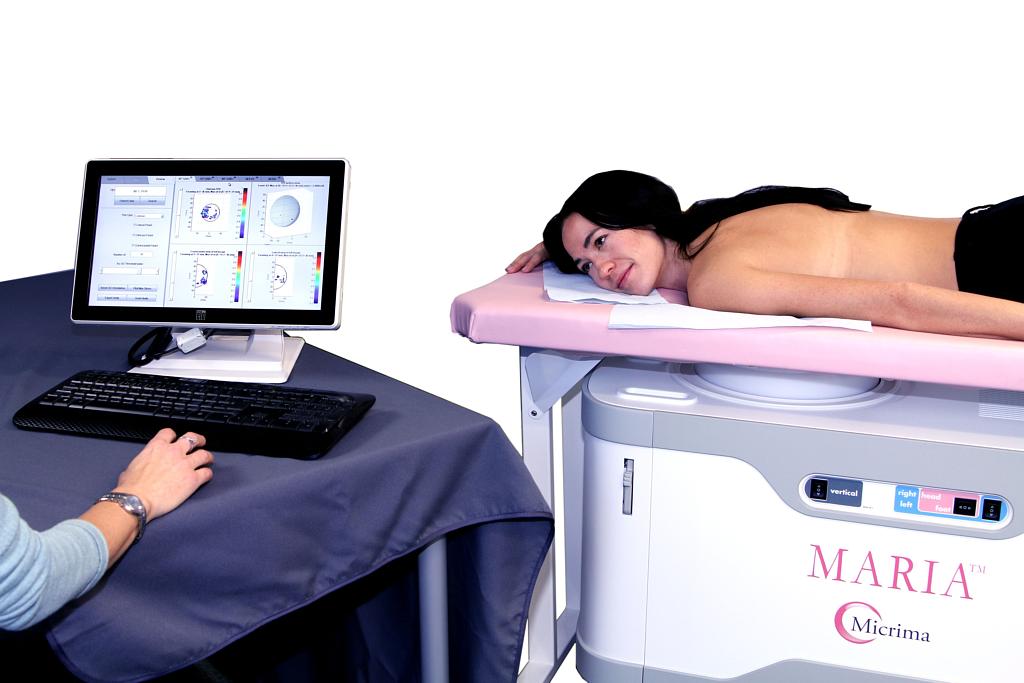 It’s that time of year when candidates for the Minnies are announced. Last year CapeRay’s dual-modality Aceso system was shortlisted for Best New Radiology Device, while this year one of the semi-finalists in this category is MARIA, a breast imaging system based on radio-waves from UK manufacturer, Micrima. The company was spun out from Bristol University in 2006 and since then has developed a number of prototypes of MARIA, conducting clinical trials and securing the CE Mark in 2015.

Instead of X-rays, the system is based on radio-waves and, similar to the whole-breast ultrasound system from Delphinus, the patient lies prone on a bed with her breast hanging under the influence of gravity in the transducer (above right). The MARIA transducer is a concave cup that can accommodate a range of breast sizes and incorporates an array of 60 radio-frequency antennae that surround the breast (below left). Each antenna transmits sequentially and the other 59 record the signal reflected from the underlying tissue, enabling the device to construct a 3D map of the breast. 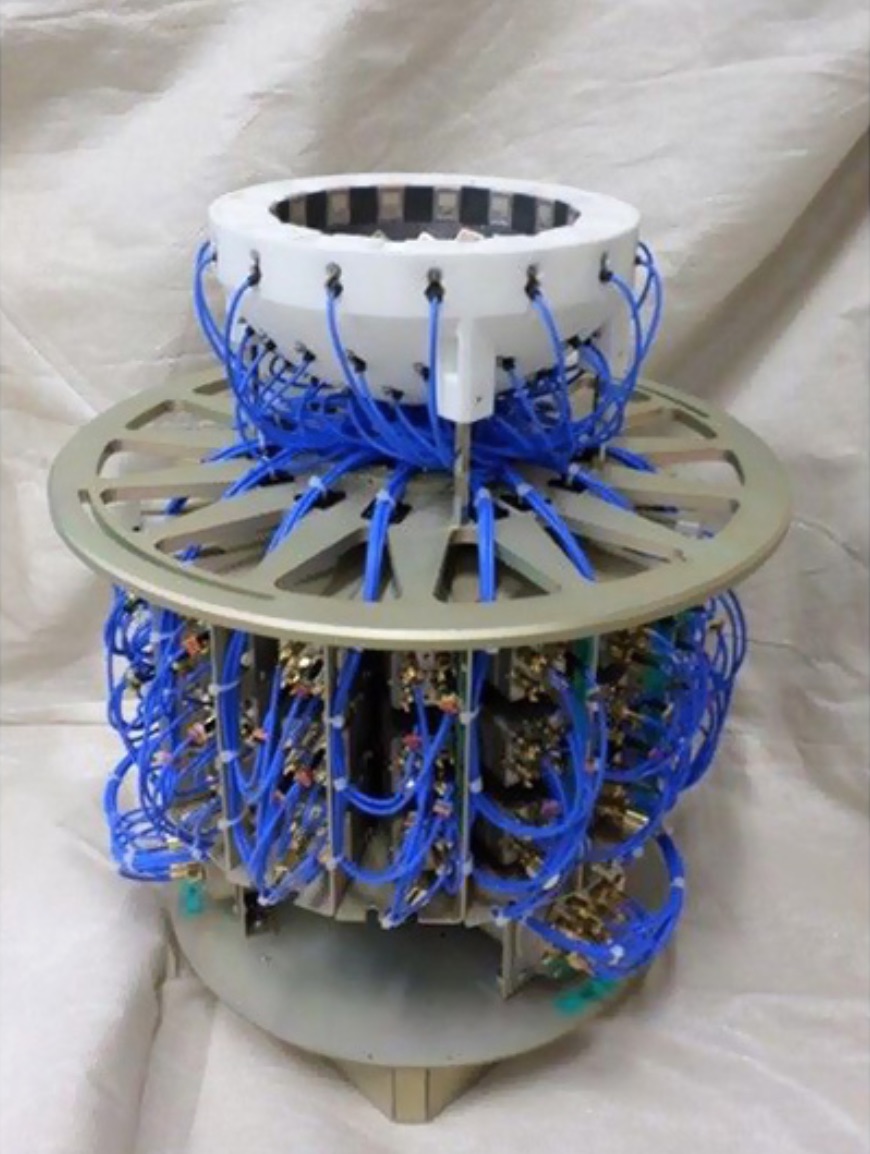 MARIA takes less than 5 minutes to scan each breast and captures variations in three tissue parameters – impedance, permittivity and conductance – that enable a clinician to differentiate between normal tissue and lesions. In 2016 the collaborators from Bristol University and Micrima published a clinical evaluation of MARIA in the Journal of Medical Imaging. The system was tested on 86 patients who met the inclusion criteria: symptomatic; due to be examined by ultrasound and mammography; able to lie prone; and having a breast size in the range 310 to 850 cm3.

Of the 86 patients, 66 had some type of lesion, with a radiologist who conducted a blind review of the mammograms making a correct diagnosis in 83% of cases, compared with 74% for MARIA. Interestingly, MARIA was more successful for dense breasts (BI-RADS c and d) with a correct diagnosis in 86% of cases compared to the radiologist’s score of 79%. Seen below right is a case (© SPIE) where the mammogram was marked as normal by the experienced radiologist while MARIA correctly identified an invasive ductal carcinoma. 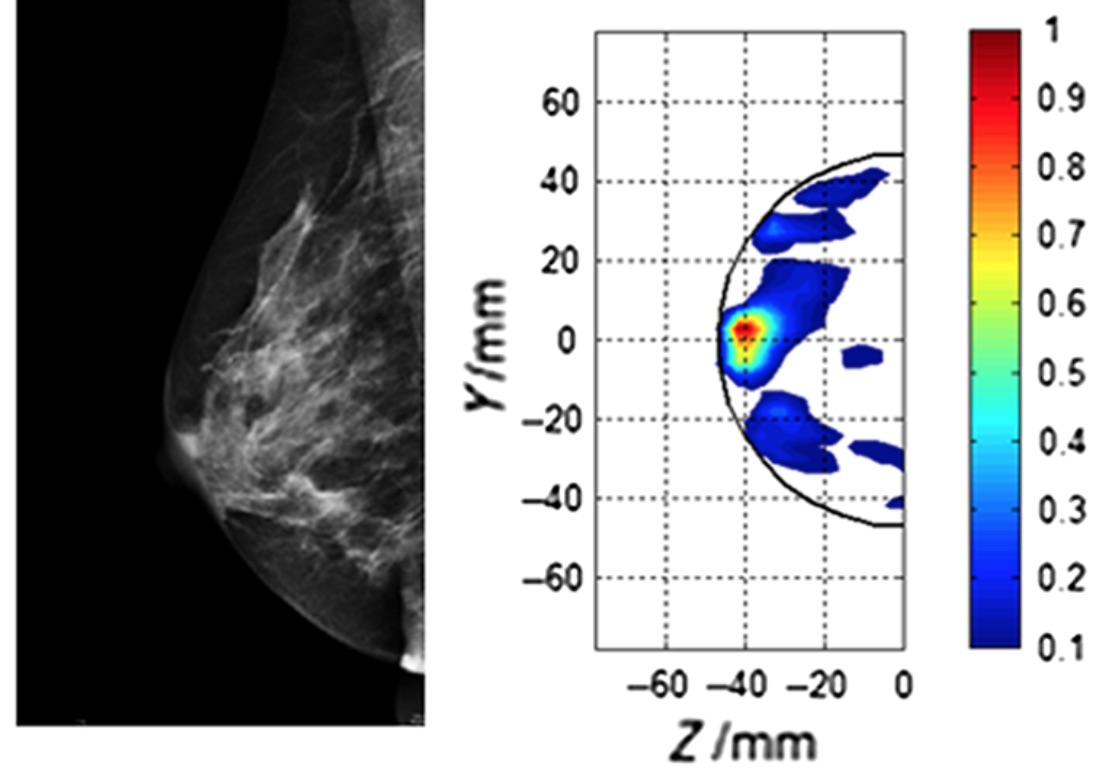 Because radio-waves produce no ionizing radiation and the system does not require breast compression, Micrima believes MARIA holds great potential as a competitor to mammography, especially as it performed better in women with dense breasts. It’s fascinating to think that a technology originally developed to detect buried land mines, might some day find application in detecting breast cancer.