The American Cancer Society (ACS) presented a paper at a congress in Paris this week, warning of an explosion in cancer deaths among women, with the greatest toll from breast cancer. The ACS has estimated that by 2030, cancer will kill 5.5 million women per annum – the population of Denmark – a staggering increase of 60% in less than two decades. Many of these fatalities will stem from cancers that are preventable and the highest burden will be among women living in low- and middle-income countries.

Sally Cowal, vice president of global health at ACS, said: “Most of the deaths occur in young and middle-aged adults. Our review highlights the large geographic inequality in availability of resources and preventive measures and treatment to combat the growing burden of cancer.” Frustratingly, the four deadliest cancers – breast, colorectal, lung and cervical – are largely preventable or, if detected early enough, can be treated successfully. Women in developing countries are exposed to known risk factors linked to rapid economic transformation, such as poor diet, obesity, lack of exercise and postponing motherhood.

In 2012, there were 6.7 million new cancer cases among women worldwide and 3.5 million deaths. Of these, 56% of the cases and 64% of deaths occurred in less developed countries. Because of population growth and an ageing cohort of women, these numbers are expected to increase to 9.9 million cases and 5.5 million deaths by 2030. 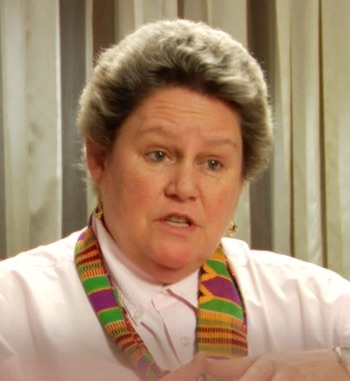 The Lancet this week published a special issue on “Health, equity, and women’s cancers” which explored this neglected health issue. They covered the global burden of breast and cervical cancers, the inequities in their incidence, survival and mortalities, and interventions that could close the gap between poor and wealthy countries. Lynette Denny, professor of obstetrics and gynaecology at the University of Cape Town (seen at left), led a team of researchers that explored interventions for women with breast and cervical cancers. They commented, “These two cancers need not be viewed as inevitably fatal, and can be cured, particularly if detected and treated at an early stage.”

Another of The Lancet’s contributors was Richard Sullivan of London, who said that hundreds of thousands of women were dying unnecessarily every year. He concluded: “Not only are the costs of essential cancer services for women lower than expected, but scale-up of diagnostic, surgical and treatment services are a highly effective investment compared to the devastating economic cost to countries, communities and families.” Now that’s a powerful call to action!