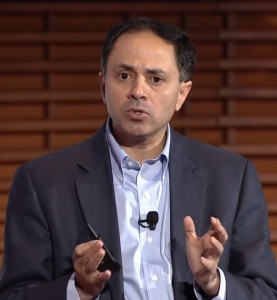 TED is an acronym for Technology, Entertainment and Design and represents the powerful convergence of these three entities. The first TED conference was held in 1984 and featured demonstrations of the Sony compact disc, 3D graphics from Lucasfilm and applications of fractals by mathematician Benoit Mandelbrot. In the intervening thirty years TED has become astoundingly popular and, with the growth and reach of the Internet, the videos of TED Talks have now been viewed more than a billion times. TED’s mission is quite simple: “We believe passionately in the power of ideas to change attitudes, lives and ultimately, the world.”

Earlier this week I serendipitously stumbled upon a TED Talk entitled “Molecular spies for early disease detection” delivered in August 2012 by Dr Sam Gambhir, Chairman of Radiology at Stanford University and Director of the Canary Center for Cancer Early Detection. In a presentation lasting less than 20 minutes he provides a compelling argument for how we will screen for breast cancer in the not-too-distant future.

On a graph plotting ten-year survival versus stage of cancer detection, Gambhir shows how a woman diagnosed in stage I has a far greater chance of survival than another patient diagnosed at stage III or IV. He describes the challenge as detecting cancer when there are just a few thousand “rogue cells” rather than at a later stage when the breast lesion is palpable and there are a few billion cancer cells, some of which may already have metastasized to other parts of the body.

Gambhir’s approach to diagnosis and treatment is based on three steps: first, using blood-based in vitro diagnostics, proteins specific for aggressive tumours are identified; and second, using “molecular spies” that can be programmed to attach themselves to cancer cells and then send out signals, the 3D location of the tumour can be established using in vivo molecular imaging techniques. Finally, using an intervention such as high-intensity focused ultrasound, the cancer cells can be destroyed. Hence the title of this blog: identify, image, intervene.

One of the novel technologies he describes is a magnetonanosensor (see image above) that uses magnetic nanoparticles to “tag” proteins in the blood sample, identifying cancer with a much higher sensitivity than conventional assays based on optical fluorescence. Gambhir finishes his presentation on a high note, revealing that the woman diagnosed with breast cancer 12 years earlier is his wife, Aruna, who was treated successfully. He concludes, “She’s the reason I’m up here today, making this work possible.”