In the Shadow of Table Mountain

Earlier this year, on 6th June, the medical school at the University of Cape Town (UCT) celebrated its centenary. It was an auspicious occasion and marked one hundred years of educating medical doctors, treating patients of the Western Cape and advancing medical science. In January 1938, after more than twenty years in gestation, a new teaching hospital was opened, immediately adjacent to the medical school. Taking its name from the estate bequeathed by Cecil Rhodes to the people of South Africa, Groote Schuur Hospital was to become synonymous with medical care in Cape Town.

Jannie Louw, professor of surgery at UCT and author of a book on the first fifty years of the medical school’s history, wrote: “Built high up on the slopes of Devil’s Peak in the shadow of Table Mountain at a cost of £850,000 (plus £150,000 for equipment), the hospital is a prominent landmark visible from far across the Cape Flats. It occupies an unrivalled site and commands magnificent views of the mountain, the sea and the city”. 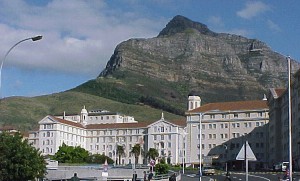 Groote Schuur is undoubtedly best known as the hospital where the world’s first human heart transplant took place on 3 December 1967. Performed by Dr Christiaan Barnard and his team, their achievement focused international attention on Cape Town and led directly to the recognition that South Africans were capable of conducting world-class research in medical science. As important as Barnard’s contribution was, however, an even more momentous breakthrough took place ten years earlier at Groote Schuur Hospital and the University of Cape Town. It is the story of the computer assisted tomography (CAT) scanner.

Allan MacLeod Cormack was a physicist in UCT’s physics department who had been seconded to Groote Schuur’s division of radiation medicine as a nuclear physicist in 1956. He was concerned about the crude manner in which radiation therapy planning was being conducted, in particular the calculation of tissue density for the patients being treated. He soon realized this was a mathematical problem that he was determined to solve. His subsequent articles in the Journal of Applied Physics led to the Nobel Prize for Medicine in 1979, an award he shared with the Englishman, Godfrey Hounsfield.

After extensive testing CapeRay installed its full-field digital mammography system at Groote Schuur this week. The PantoScanner Soteria will be licensed next week, followed by a clinical trial of 30 patients. Our odyssey continues in the shadow of Table Mountain.