Tumours are either Benign or Malignant

Every day, cells in our bodies divide, grow and die. Most of the time the division and growth of these cells occurs in an orderly manner. However, sometimes the cells grow out of control and this growth leads to the formation of a mass or lump that is called a tumour. When a woman examines her own breasts and discovers a lump – a tumour – she will be understandably concerned and will schedule an appointment with her doctor, who will in turn refer her to a radiologist. The task of the radiologist will be to determine if the tumour is benign or malignant. 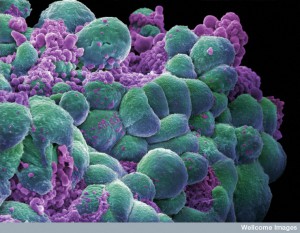 Most breast lumps are benign so that when they are removed they typically do not reappear, nor do they invade nearby tissue. Examples of benign breast tumours include fibrocysts (scar-like tissue surrounding a fluid-filled sac) and fibroadenomas. It may sometimes be prudent for the radiologist to biopsy the tumour so that a pathologist can confirm the cells are not malignant.

Malignant tumours consist of abnormal cells and are cancerous, with the ability to invade nearby tissue and spread to other parts of the body. Such a tumour that develops in the breast is called breast cancer (see image at right). There are essentially two main types of breast cancer: non-invasive, also known as carcinoma in situ, where the cancer cells do not spread; and invasive, where the cells can expand into nearby tissues. Through a process called metastasis, the cancer cells travel to distant parts of the body via either the blood stream or the lymphatic system.

Breast cancer usually develops in either the lobules, the milk-producing glands of the breast, or the ducts, that are the tiny tubes that carry the milk from the lobules to the nipple. These structures are surrounded by the stroma which are fatty and connective tissues (see anatomy at left). Invasive (or infiltrating) ductal carcinoma accounts for about 8 out of 10 malignant breast cancers.

Malignant breast tumours need nourishment to grow which they get by developing new blood vessels in a process called angiogenesis. The angiogenic changes in both the anatomy and physiology of the breast lead to distinct features which means that medical imaging technologies – such as X-rays, ultrasound, magnetic resonance and positron emission – can assist the radiologist make the correct diagnosis.