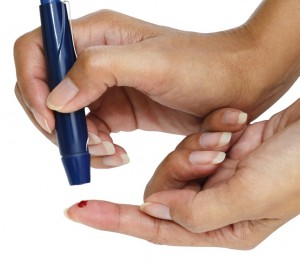 Imagine a test in which a woman visits a clinic, a sample of blood is acquired from a simple pin prick of her index finger, and within a few minutes the blood is analysed and a definitive diagnosis is made. She either has breast cancer or she does not. So, the question we explore is: Does such a test yet exist?

A year ago, scientists from Imperial College in London published a paper in Cancer Research in which they reported their discovery of a strong association between the risk of breast cancer and a molecular change in a particular white blood cell gene called ATM. Looking for a chemical effect called methylation which switches genes on and off, they analysed blood samples from almost 1400 women — almost half of whom developed breast cancer between 3 and 11 years later. The researchers showed that women with the highest methylation levels in the ATM gene were twice as likely to develop cancer as those with the lowest levels.

Earlier this year, Emanuel Petricoin presented a paper at the Miami Breast Cancer Conference in which he reviewed the development of new blood tests for both the early detection and treatment of breast cancer. One of the approaches that he highlighted was a test based on unique glycoproteins that can be identified by quantitative mass spectrometry of breast tumours. The basic premise is that proteins associated with the tumour find their way into the blood stream, thus serving as a biomarker.

Perhaps one of the most promising techniques has been developed by Henri Tiedge at the State University of New York Downstate in Brooklyn. He studied regulatory ribonucleic acids (RNAs) — specifically brain cytoplasmic RNAs — that are important mediators of gene expression in nerve cells. Realising the importance of his work, Tiedge secured a US patent (7,510,832), and subsequently published his groundbreaking findings in Carcinogenesis. The RNA was expressed at high levels in invasive breast carcinomas but was not detectable in normal breast tissue or benign tumours such as fibroadenomas. Tiedge has recently been awarded a $50,000 grant to assist in commercialization of his blood test.

Although breast cancer tests based on biomarkers in the blood stream will soon be available in the clinic, they will not replace diagnostic imaging devices such as our dual-modality Aceso system. To treat a patient with breast cancer successfully, the doctor needs to know exactly where the lesion is located.