Is MRI Ready to Replace X-rays?

Five years ago Dr Christiane Kuhl and her colleagues at Aachen in Germany published a landmark paper in The Lancet where they advocated the use of magnetic resonance imaging (MRI) to detect breast cancer at its earliest stage. In fact they went so far as to recommend it as a replacement for, rather than as an adjunct to mammography.

“I can only urge people that MRI is the most potent breast imaging tool,” she said. “Researchers are constantly developing new tools like tomosynthesis and elastography, but every time the diagnostic accuracy of such a technique is investigated, they compare it to MRI. This is an implicit acknowledgement that MRI is considered the gold standard, the reference standard for breast cancer diagnosis.”

Unlike X-rays in mammography, MRI uses no ionising radiation. Instead it utilises a powerful magnetic field to align the orientation of hydrogen nuclei in the body and, via a coil that acts as a radio frequency transmitter, alters the alignment of the nuclei. The magnetic field thus generated is detected by the MRI scanner and this enables the reconstruction of the underlying tissues. The development of a special bilateral coil has facilitated simultaneous imaging of both breasts, with the patient lying face down on her stomach. MRI not only produces 3D morphology of breast tissue but it also provides physiological information such as vascular density changes associated with angiogenesis. 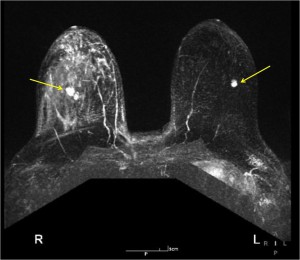 MRI confirmed carcinoma in the right breast as well as identifying an additional mass in the left breast that was not seen in mammography. Courtesy of Dr Stamatia Destounis.

This of course begs the question: Is MRI ready to replace X-ray mammography as a routine screening method for breast cancer? While there is no doubt that diagnosis with MRI has a sensitivity (the percentage of true positives) of over 90% and the ability to detect cancers that are mammographically occult (see image at right), it has traditionally performed poorly when compared to mammography on specificity (the percentage of true negatives). This latter parameter is an important one because a false positive diagnosis means the patient will be subjected to the discomfort of an unnecessary biopsy. However, in a more recent paper published in the Journal of Clinical Oncology, Kuhl and her team have reported a specificity of 98%.

Nevertheless, MRI is an expensive imaging modality. It is also very time-consuming to acquire and read images so, for the time being, MRI will continue to be used as a diagnostic rather than a screening tool. It is not yet ready to replace mammography as the workhorse for breast cancer screening.