Breast cancer is normally considered to be a disease that affects only women. This is not the case, however, as two studies have just shown. Jon Greif, a breast cancer surgeon from California, recently presented a paper in which he analysed ten years of national data: 13,457 male patients were diagnosed with breast cancer during the previous decade versus 1.4 million women (these data represent about 75% of all breast cancer cases in the USA).

While breast cancer in men is therefore relatively rare, there was nevertheless concern that men’s tumours tended to be much larger at diagnosis and the cancer was more likely to have spread to other parts of the body. It would appear that men often dismiss symptoms that would be an automatic red flag for women.

The second and more significant study, recently published in the British Journal of Cancer, was conducted by Ros Eeles and her team at the Institute of Cancer Research and Royal Marsden Hospital in the UK. What they showed in a study of 913 men was that a faulty gene which is known to increase the likelihood of breast cancer in women also raises the risk of prostate cancer in men by a factor of four. The gene in question is called BRCA1 and men carrying the gene – inherited from their mothers – have a one in eleven chance of developing a particularly aggressive form of prostate cancer before the age of 65. 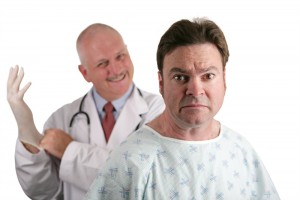 According to Eeles, “Until now there has been some doubt as to whether mutations in the BRCA1 gene increase the risk of prostate cancer. The important thing about this kind of result is that there are drugs that can target specific defects that occur with the BRCA1 mutation and this can open up the possibility of targeted medicines based on genetics.” Once gene testing becomes more rapid and the cost is significantly reduced, it may be possible to identify those men at higher risk and monitor them from an early age.

Since prostate cancer is one of the most common cancers affecting men worldwide – in some countries it is even more prevalent than lung cancer – the key to successful treatment, as with breast cancer, is early detection. The majority of men know absolutely nothing about the disease or its symptoms, which challenges us to raise the level of awareness. And that’s one of the purposes of these weekly blogs!