Made in South Africa

Just over 80 years ago, on 31 December 1932, a white farmer and his son followed up on a legend they had heard about from a native man called Tshiwana. What they discovered was a remarkable site — the Kingdom of Mapungubwe — located on the Limpopo River at the confluence of three modern-day states: South Africa, Botswana and Zimbabwe. Archaeologists subsequently discovered that the kingdom’s rule extended from 1050 up until 1270 AD, a period when Europe was struggling through the Dark Ages.

Among the skeletons excavated at Mapungubwe — meaning “place of the stone of wisdom” — was one, thought to be the King, who was buried with a headrest and three golden objects. One of these artefacts was a miniature rhinoceros, beautifully constructed from gold foil moulded over a soft core of sculpted wood. The golden rhino provided evidence not only of the early manufacturing skills of the people of southern Africa, but of the wealth and class structure of the people of Mapungubwe who had international trade links that stretched across the Indian Ocean to the Middle East, India and China.

In recent times, the manufacture of motor vehicles has been one of South Africa’s great success stories. Among those multi-national companies making cars in the country are BMW, Ford, General Motors, Mercedes-Benz, Nissan, Toyota and Volkswagen who between them produce almost 600,000 vehicles per annum, half of these being exported. In fact, for anyone living in a country like the UK, Australia or Japan who owns a right-hand drive 3 series BMW, it will have been manufactured in Pretoria. 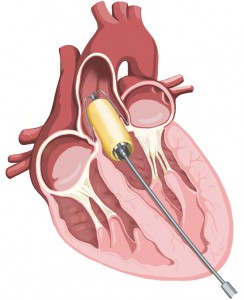 Two years ago we described how the Western Cape province of South Africa was a hotbed for the development of medical devices. Included were companies like DISA Vascular, a manufacturer of coronary stents and catheters, Sinapi Biomedical, who make an innovative chest drain, and TitaMED, who produce titanium implants to treat patients with spinal disorders.

Like CapeRay, Strait Access Technologies is a spin out from the University of Cape Town, and was launched 18 months ago with the purpose of developing innovative devices for treating children with rheumatic heart disease. One of their first products, successfully tested earlier this month in an animal trial, is a device to deploy a crimped heart valve without occluding the flow of blood in a beating heart (see illustration at left). From Mapungubwe to Cape Town, we can all celebrate the expression, “Made in South Africa.”