One of the key people involved when a woman attends a breast clinic is a mammographer: the radiographer who operates the equipment and acquires the images. The design of the acquisition workstation, often abbreviated as AWS, is therefore critical to the mammographer’s success. For our full-field digital mammography system — the PantoScanner Soteria — our design team gave careful thought to the ergonomics of the AWS and its human machine interface (HMI). 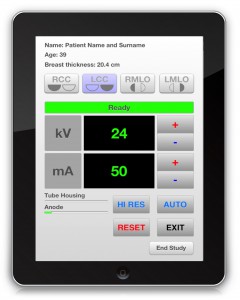 The primary materials used for the construction of our AWS are lead glass, sheet metal and Corian. Lead glass is necessary to screen the radiographer from X-ray radiation, sheet metal is used to enclose the generator electronics, while Corian — a versatile material made by DuPont — is used as the construction material for the work surface. The choice of Corian was based on its high quality surface finish as well as its hygienic properties. Our industrial designer, John Harverson, commented: “We managed to use Corian in a very innovative way, particularly the way in which HMI details such as switches and light emitting diodes were mounted within the work surface. Details such as this contributed to the workstation’s clean and simple aesthetic”.

The computer located within the AWS is an Apple Mac mini, just 20 x 20 x 4 cm in size, yet providing extraordinary computing power. For the user interface to the Mac mini we dispensed with the standard keyboard, mouse and large screen, and decided instead to use an iPad, believing that mammographers would rapidly learn to use this now-ubiquitous device. 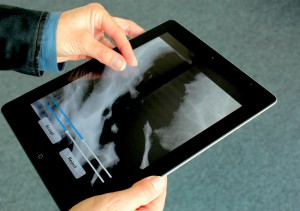 Our software engineer Jacques Pienaar was set the task of designing the user interface and writing the code for the application, known as an “app”. He wanted to design a simple and sleek app where the design would fit in with the world of modern medical devices, incorporating easy-to-see controls and an interface that would be simple to understand. According to Jacques, “I was able to implement gesture-based interaction with the captured imaged — pinch to zoom, two finger panning to move the image, and one finger panning for windowing and contrast control”.

Importantly, the high resolution Retina display on the new iPad allows the mammographer to decide if she has acquired an image of satisfactory quality. She can then tap on the screen and send the images off to the breast clinic’s picture archiving and communication system, or PACS. It’s as simple as that.