This past Sunday evening in San Francisco the Denver Brocos squared off against the Carolina Panthers for the 50th annual playing of the Super Bowl. Almost 112 million Americans sat down in front of their television screens to watch a match-up between two iconic quarterbacks: 39-year old Peyton Manning of the Broncos versus the talented young pretender, 26-year old Cam Newton of the Panthers. In the end, it was the Broncos’ defence that dominated the game, enabling the team from Denver to triumph by 24–10. For many viewers, however, the game will probably be remembered for something that happened off the field.

Given the size of the audience, advertisers have traditionally flighted commercials during the game as a way to create awareness of their products. The cost of a 30-second advertisement has increased from $37,500 at the original Super Bowl in 1967 to around $5 million at this year’s event. The advert that caught everyone’s attention at Super Bowl 50 depicted an expectant father teasing a foetus with a Doritos chip during a routine ultrasound examination. 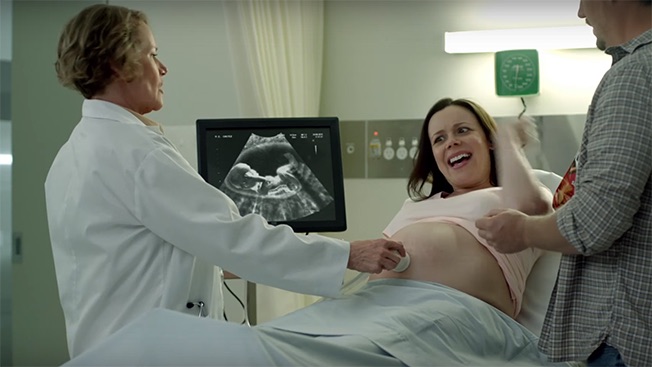 The commercial opens with the obstetrician applying an ultrasound probe to the mother’s abdomen and as the image of the foetus appears on the screen, saying “And there’s your beautiful baby. Any day now.” (Click here to view the advert). The father is nonchalantly munching on a Doritos chip when he discovers that the foetus is moving in response to the chip. He waves the chip around until the frustrated mother grabs the chip and throws it across the room. The commercial ends with everyone screaming as the baby shoots out the birth canal in pursuit of the chip!

The advertisement drew the attention of the National Abortion Rights Action League (NARAL), also known as Pro-Choice America  which used its Twitter feed to comment that the foetus was being “humanized,” the father was depicted as “clueless,” while the mother was characterized as “uptight.” Predictably, NARAL’s tweets drew the ire of conservative groups opposed to abortion.

The advertisement was created by an Australian filmmaker Peter Carstairs and his actress wife Sibylla Budd who were inspired by the birth of their own baby boy: the ultrasound images are in fact an animated version of Freddy in utero. NBC correspondent Olivia Sterns commented, “I loved it,” because it was “absurd and laughable and fun.” While the quality of football last Sunday may have fallen short of expectations, the ultrasound advert was a memorable one.