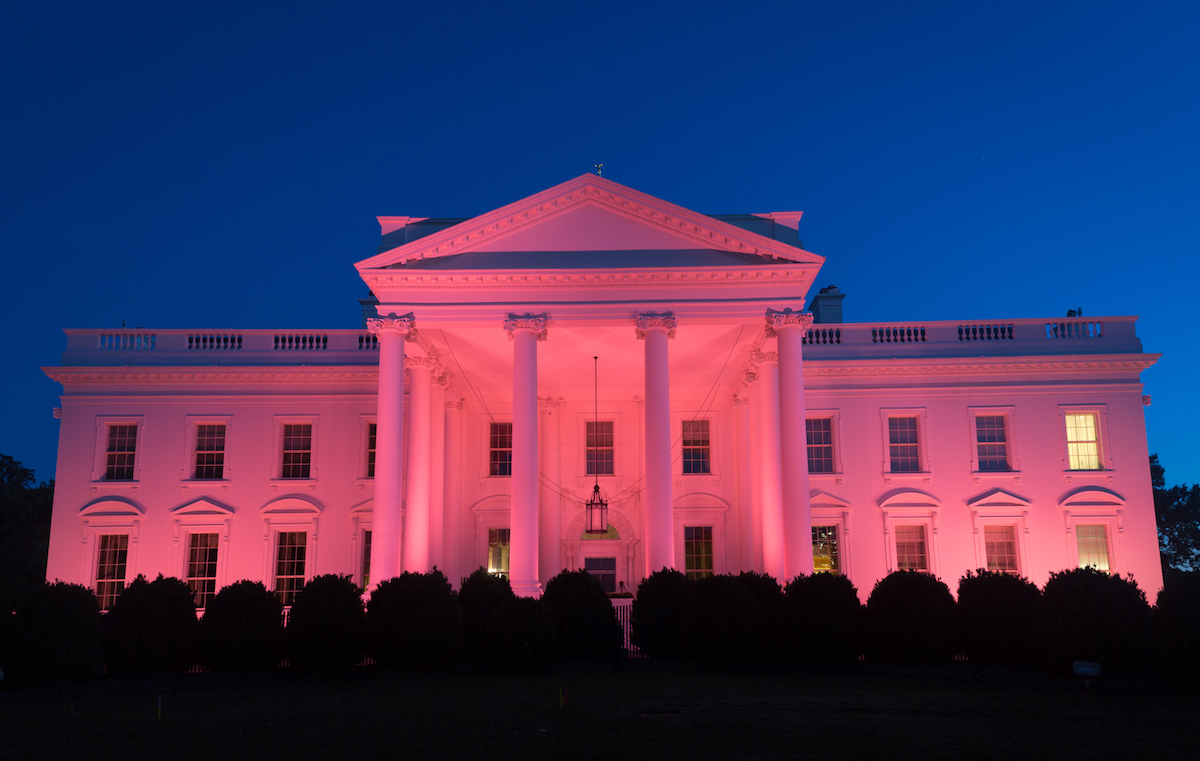 Today, 1 October 2021, marks the beginning of Breast Cancer Awareness Month (BCAM), an annual campaign to increase awareness of the disease and the benefits of early detection. As a little girl growing up in the early 1900s, Mary Lasker was haunted by the image of a young woman treated for breast cancer and, together with her husband Albert, persuaded the US government to fund the “War on Cancer.” In 1985, the American Cancer Society partnered with AstraZeneca to establish BCAM and, ever since, October has seen an explosion of pink, such as the White House (© Wikipedia).

Given this focus over the past few decades, it seems reasonable to ask: How effective has BCAM been in raising awareness about the benefits of mammography and early detection of breast cancer? A group of researchers from Albuquerque, New Mexico, set out to answer this question and have just published their findings in Preventive Medicine. To evaluate the effects of BCAM they used the Internet Search Interest (ISI) score, a metric which is produced by the Google Trends tool. 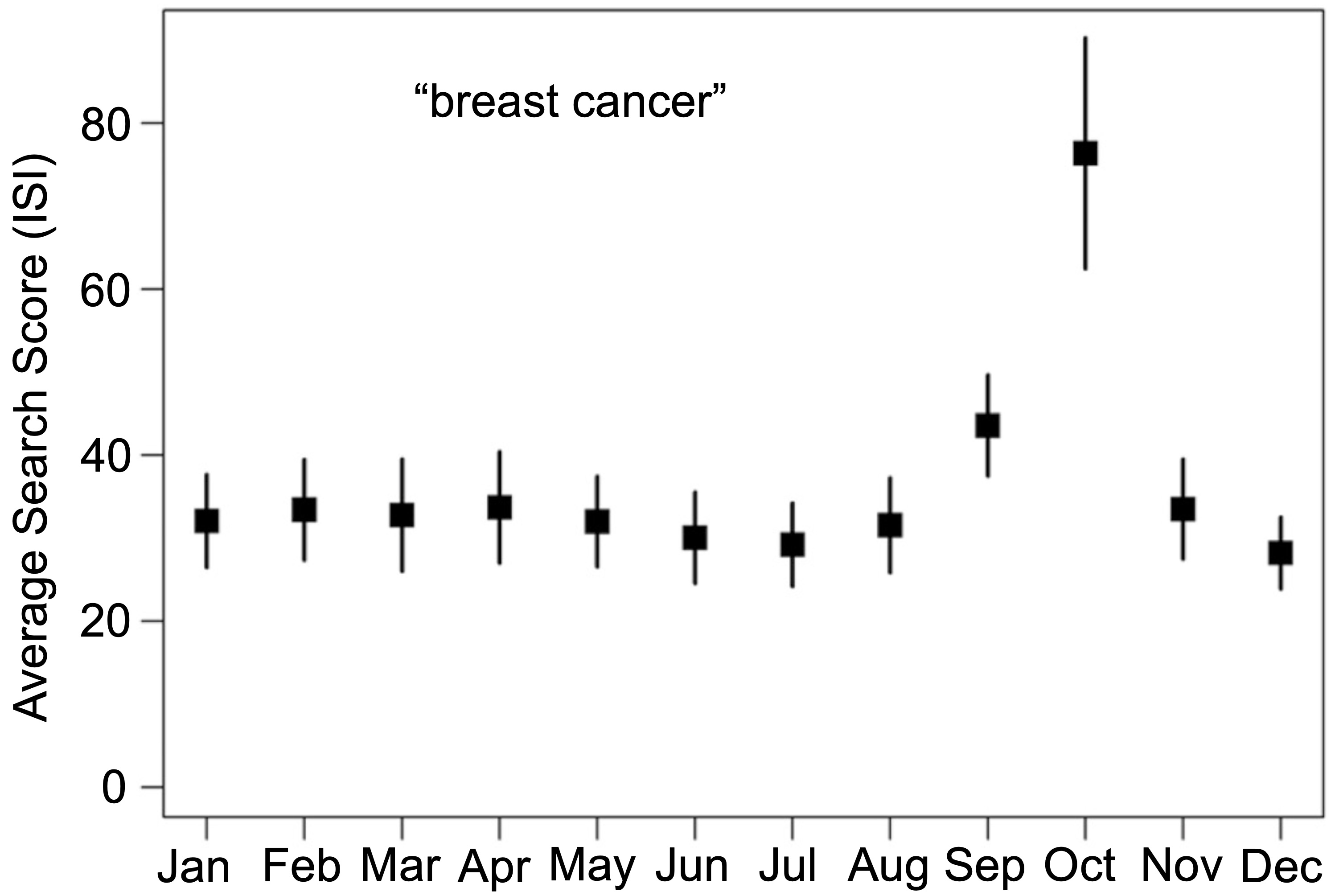 Using this tool, they generated ISI scores for the search words “breast cancer” and “mammogram” for each of the 50 states and major metropolitan areas in the USA from 2006 to 2019. The ISI has a maximum value of 100 and represents Google internet searches for a particular population relative to the highest number of searches in the country over a given period. Seen at left (© Elsevier) is the average search score plotted as a function of month for the search term “breast cancer,” where the ISI score for October is significantly higher than all other months.

When the data were broken down by gepgraphy, there were significant differences in the ISI scores among the 50 states and among major metropolitan areas. Seen below right (© Elsevier) are the scores for the search word “mammogram,” where the states of Missouri, Pennsylvania and Tennessee had the highest scores. This geographic information on ISI scores could then be linked to the uptake of screening mammography and breast cancer mortality in different metropoles. 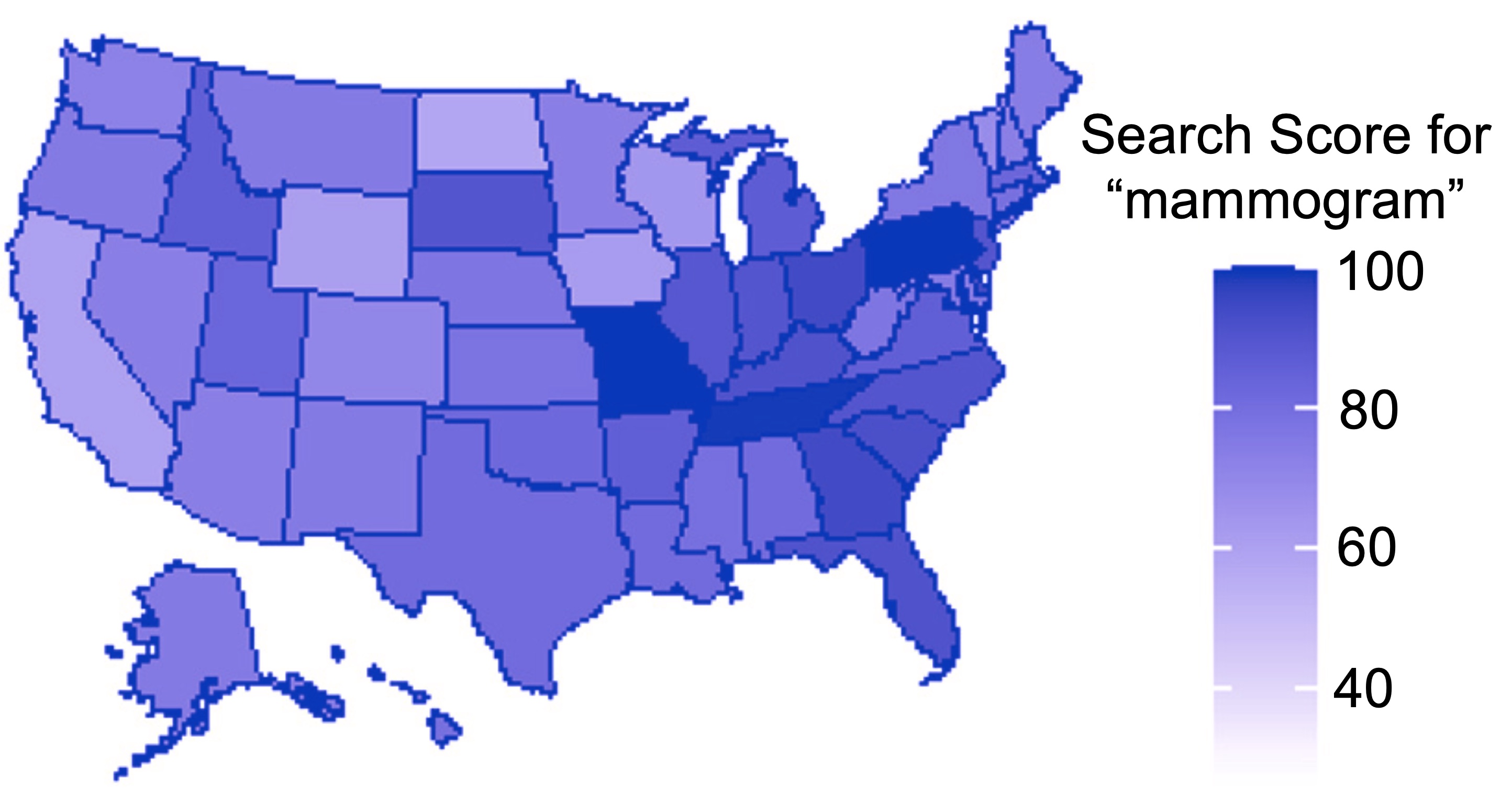 Ten years ago, a paper published in the Journal of Health Economics evaluated whether BCAM had led to increased diagnosis of breast cancer. The authors showed that from 1993 to 1995, when breast cancer advocacy was rapidly expanding, BCAM led to an increase in the number of diagnoses in November, although this finding subsequently tailed off. However, lest we forget: breast cancer does not confine itself to a 31-day period in October.