More than 50% of African women diagnosed with breast cancer each year die of the disease, compared with European countries where the figure is considerably lower than 30%. Among the reasons for this difference are: the majority of African women present at a younger age, before menopause; the stage of presentation is later in Africans, when cancer has already metastasized; and gene expression probably differs between women of African and European ancestry. Sadly, no African country has a government-sponsored breast screening programme that could contribute to earlier detection and decreased mortality rate.

In South Africa, women who are able to afford medical insurance can attend a radiology practice every second year and receive a mammogram plus ultrasound, with the exam costing $100. However, the vast majority of women do not have insurance and are therefore reliant on government hospitals that own the necessary equipment which is used primarily for diagnostic rather than screening purposes. Stepping into the breach is a non-profit company called PinkDrive that currently operates three mobile mammography vans which travel to peri-urban areas, enabling numerous communities to have access to breast screening. 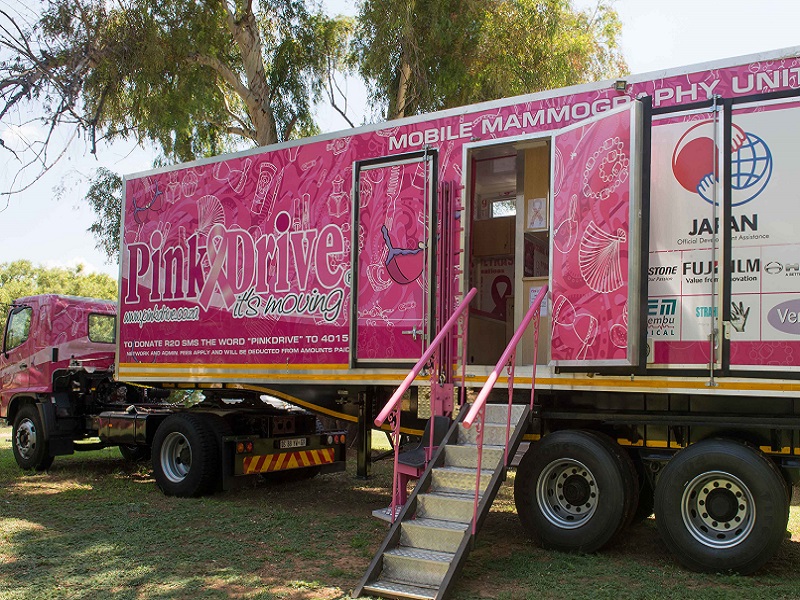 The two provinces that have benefited from this service are the Western Cape and Gauteng. It has just emerged that the health authorities in KwaZulu-Natal (KZN) – one of the country’s larger provinces – have turned down an offer by PinkDrive to deploy one of its trucks in the province. All the PinkDrive was asking for in return was fuel for the truck and accommodation for a few team members. Ironically, there is a crisis in KZN at present with women having to wait up to six months to have a diagnostic mammogram.

Noelene Kotschan, CEO of PinkDrive, commented: “We have offered the department use of our machines for free because we know there is a serious problem in the province. Our request for petrol and accommodation is a small ask, when one considers we are doing what the government should be doing, which is providing a decent health service for its citizens.”

An opposition politician, Dr Imran Keeka commented that he would welcome the use of the truck in KZN because this was something the province desperately needed to address the oncology crisis. He said, “Breast cancer is the number one killer in KZN among female cancer patients. Prevention is important, and we need this truck in our province due to the ongoing problems of our mammogram machines not working.” The government, however, said it has other priorities.