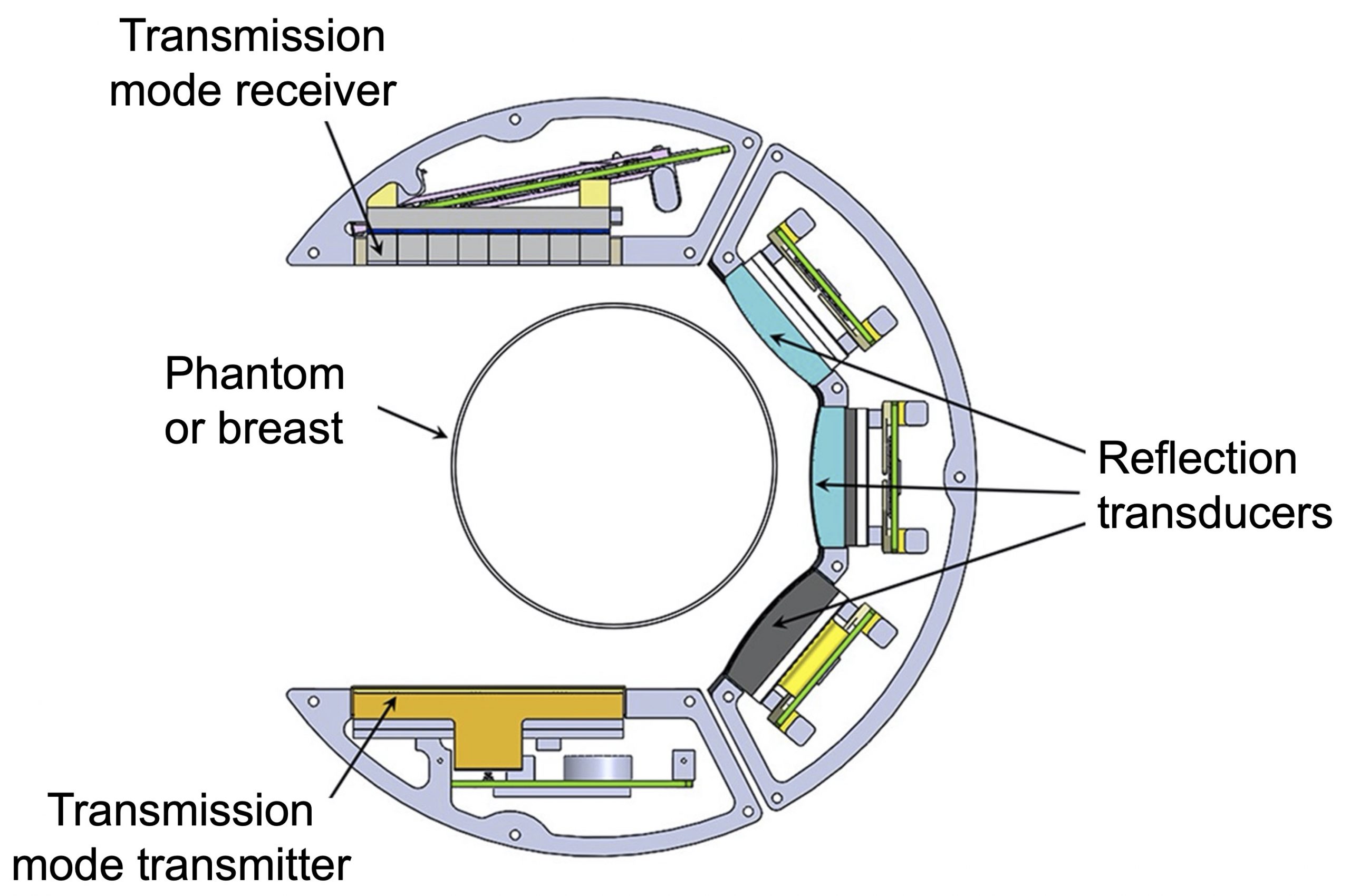 Two years ago, we introduced a company called QT Ultrasound – where QT stands for “quantitative transmission” – that had just launched three imaging centres based on their novel technology. At right is a diagram (© American Association of Physicists in Medicine) of their ultrasound transducer which rotates 360 degrees around the breast, with the woman lying face-down on a bed. As can be seen, there is a transmitter that generates ultrasound waves which pass through the breast into a receiver, as well as three transducers that capture reflected signals.

QT Ultrasound has just published a multi-reader study in Academic Radiology where they compared transmission ultrasound with full-field digital mammography (FFDM) for both detection and recall rates for breast cancer lesions. It is an open access article that can be freely downloaded by clicking here. This was a retrospective study based on data gathered at five different clinical sites with 22 radiologists who each evaluated 108 breast cases: 42 normal, 39 benign lesions, and 27 confirmed cases of cancer. All subjects received both QT and FFDM scans within 90 days. 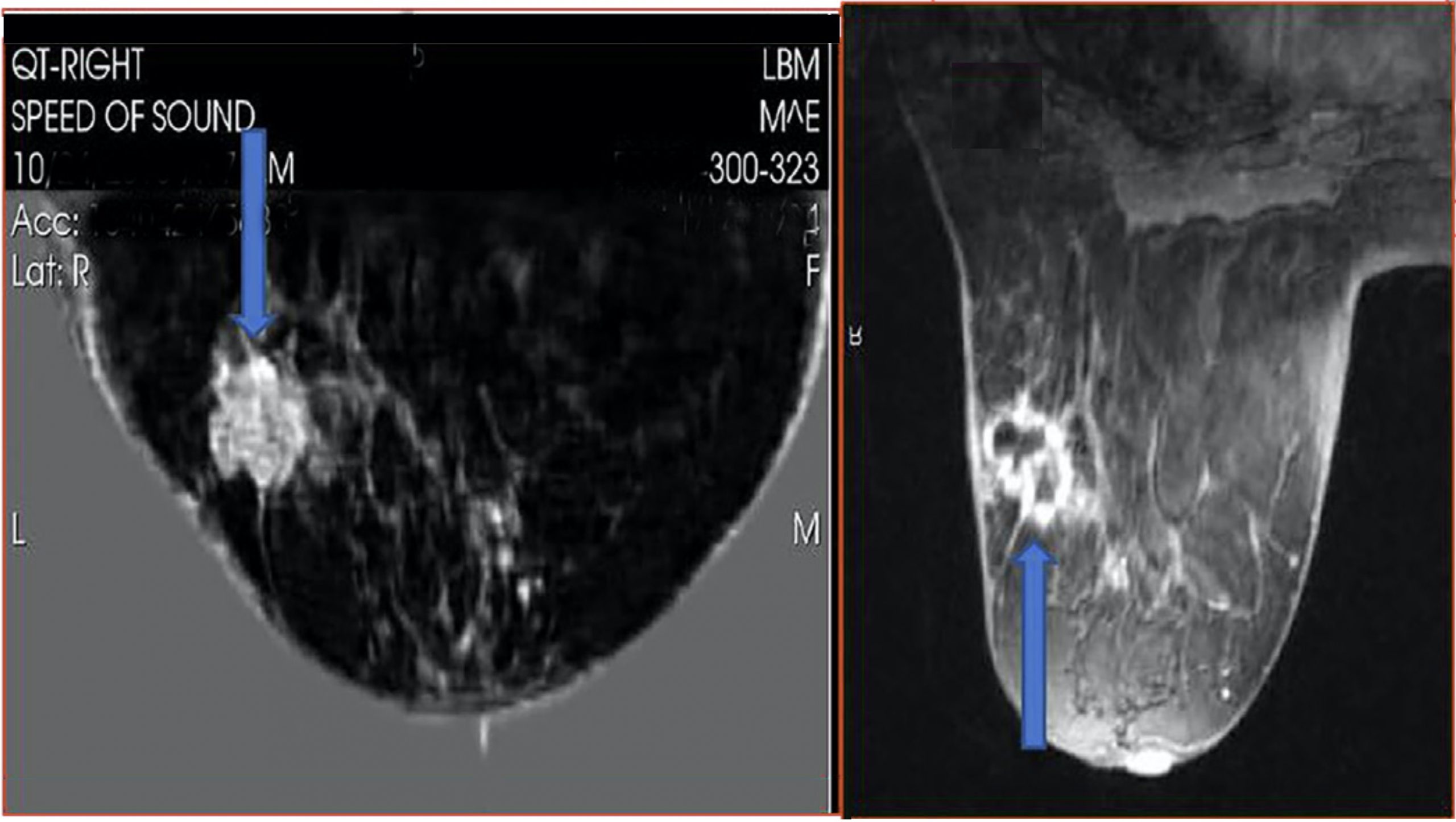 Seen at left (© Association of University Radiologists) are a QT image of an invasive ductal carcinoma with the lesion highlighted in blue (L) and an MRI image of the same lesion (R). Since the QT scan is fully automated with the transducer moving upwards from the nipple to the chest wall, the system may be considered an automated breast ultrasound (ABUS) device that utilises both transmitted and reflected signals. This enables the system to generate 3D image volumes of speed-of-sound maps and reflection that are co-registered and facilitate identification of different breast tissues.

Overall performance of the radiologists was measured as the area under the curve (AUC) for sensitivity plotted against specificity. As seen below right (© Association of University Radiologists), QT outperformed FFDM in all four comparisons with the differences being statistically significant. In addition, the recall rates for QT were significantly lower (i.e. better) than FFDM for benign lesions. 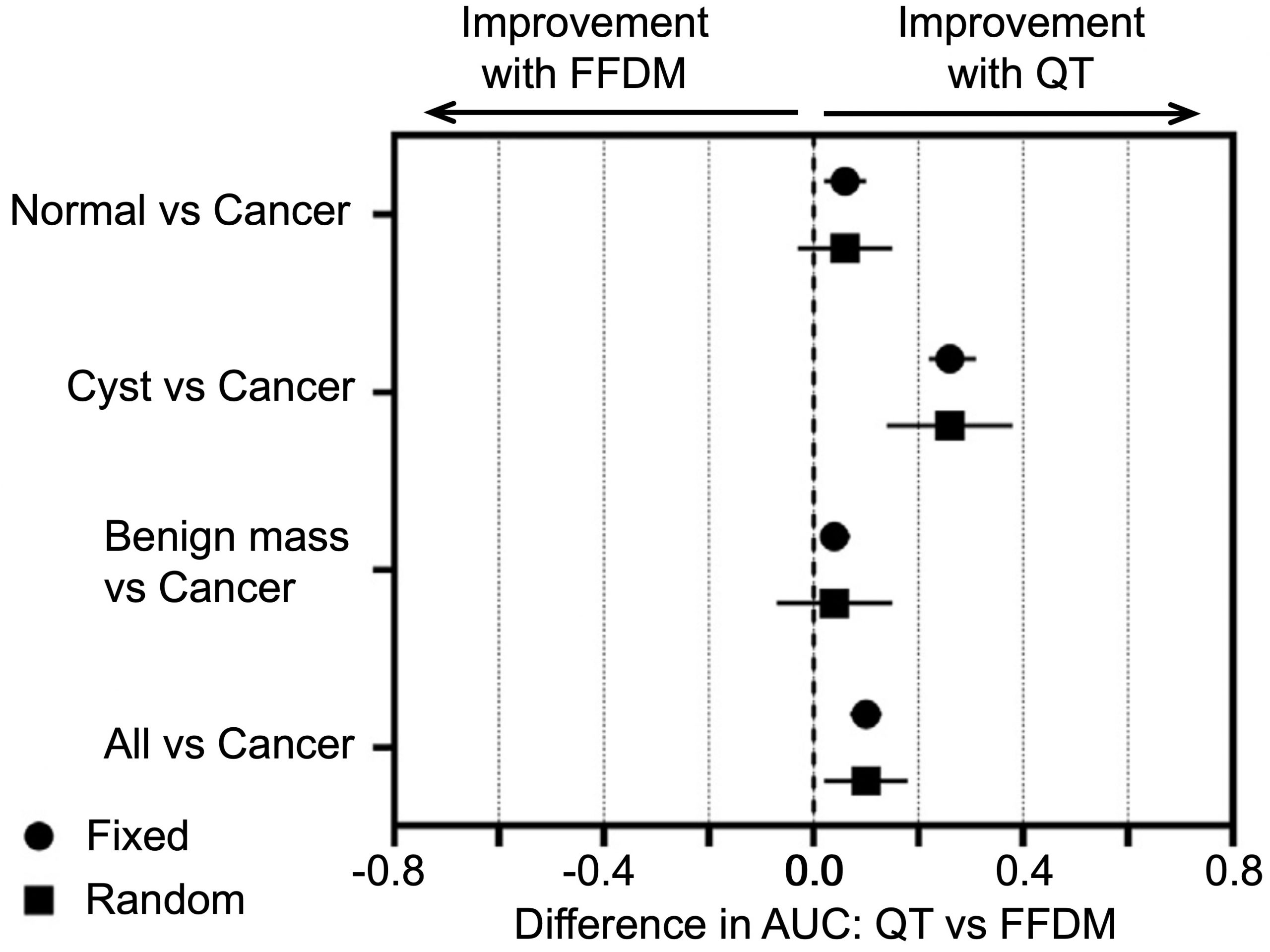 At the moment, the FDA has mandated that QT Ultrasound’s scanner “is not to be used as a replacement for standard screening mammography,” although the company is hoping further clinical trials will help it obtain Breakthrough Device Designation. This will enable the company – which has just signed a deal with a Dutch firm to distribute their scanner in Europe – to screen younger women who may not qualify for FFDM. At CapeRay we believe that our Aceso system, which combines FFDM and ABUS, is the way to go.