Rethinking the Treatment of Breast Cancer

Thirty years ago the American Cancer Society joined forces with the pharmaceutical company AstraZenica to found National Breast Cancer Awareness Month  Since then, October has been the month when the public is made aware of research into the cause, prevention, diagnosis, treatment and potential cure for breast cancer. This week the magazine Time featured the topic on its cover with the provocative heading, “What if I decide to just do nothing?” (see below right). The author Siobhan O’Connor interviewed a patient, Desiree Basila, who had questioned her surgeon about the recommended lumpectomy. 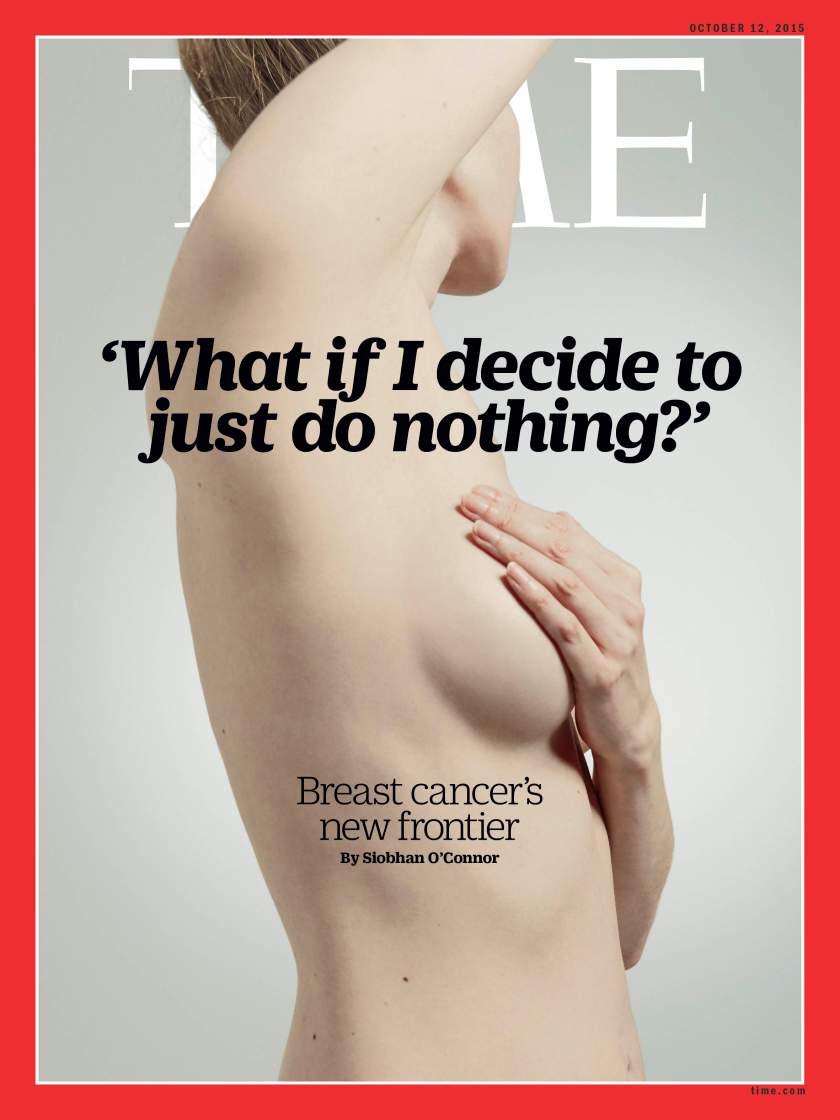 Basila had been diagnosed with ductal carcinoma in situ (DCIS) and, based on her own research, had discovered that there was disagreement among healthcare professionals about the standard treatment of this early stage breast cancer. To her surprise, her surgeon Dr Shelley Hwang said that some patients were electing “to do nothing” and so Basila chose the conservative approach of watchful waiting. She began taking tamoxifen, a drug that controls tumour growth by blocking oestrogen, and enrolled in a clinical study that involved surveillance with twice-a-year mammograms alternating with magnetic resonance imaging. That was eight years ago, her DCIS has not progressed and Basila, now aged 60, is satisfied she made the right decision.

Screening has led to many more breast cancers being detected, with about 25% of these being classified as DCIS  Because the abnormal cells lining the milk ducts are non-invasive, DCIS is not considered to be immediately life threatening. Despite, or because of the uncertainty surrounding the disease’s progression, the treatment options vary widely: from bilateral mastectomy, to unilateral mastectomy, to breast-conserving surgery, to no surgery, with this latter option chosen by fewer than 10% of patients.

Dr Laura Esserman is an outspoken surgeon in San Francisco who argues: “I hear people say that medicine is so important that we can’t be too quick to change, and I would say the opposite: because it’s so important, we need to innovate.” She has created a DCIS registry, offering patients the option of active surveillance, and launched a study called WISDOM in which women will be randomly assigned to either annual screening or a more personalised screening approach. Esserman is optimistic: “We’ll learn over time what works.”

Basila acknowledges, “What I am doing is not foolproof. I know that life is finite and death is unavoidable. For me it came down to the quality of the life I want to live.”