At a congress hosted last week by the Optical Society of America in Florida, researchers from the Politecnico of Milan in Italy presented a new instrument for the detection of breast cancer. Their optical mammography (OM) device has been designed for use as an adjunct to full-field digital mammography (FFDM), a well-established technique based on X-rays that suffers from poor sensitivity, particularly for women with dense breast tissue. The developers claimed their new system “increases the sensitivity of OM by as much as 1000-fold.” So how does it work?

As seen in the schematic diagram below (© Edoardo Ferocino), there are seven laser heads with wavelengths ranging from 635nm to 1060nm that are pulsed sequentially. The infrared light is then coupled and collimated before passing through the breast which is compressed. On the other side of the breast is an eight-channel silicon photomultiplier (SiPM) probe that translates in alignment with the collimator above, and detects the light transmitted through the breast. The signals from the probe are in turn amplified and then passed through a time-to-digital converter, before being processed by a personal computer. 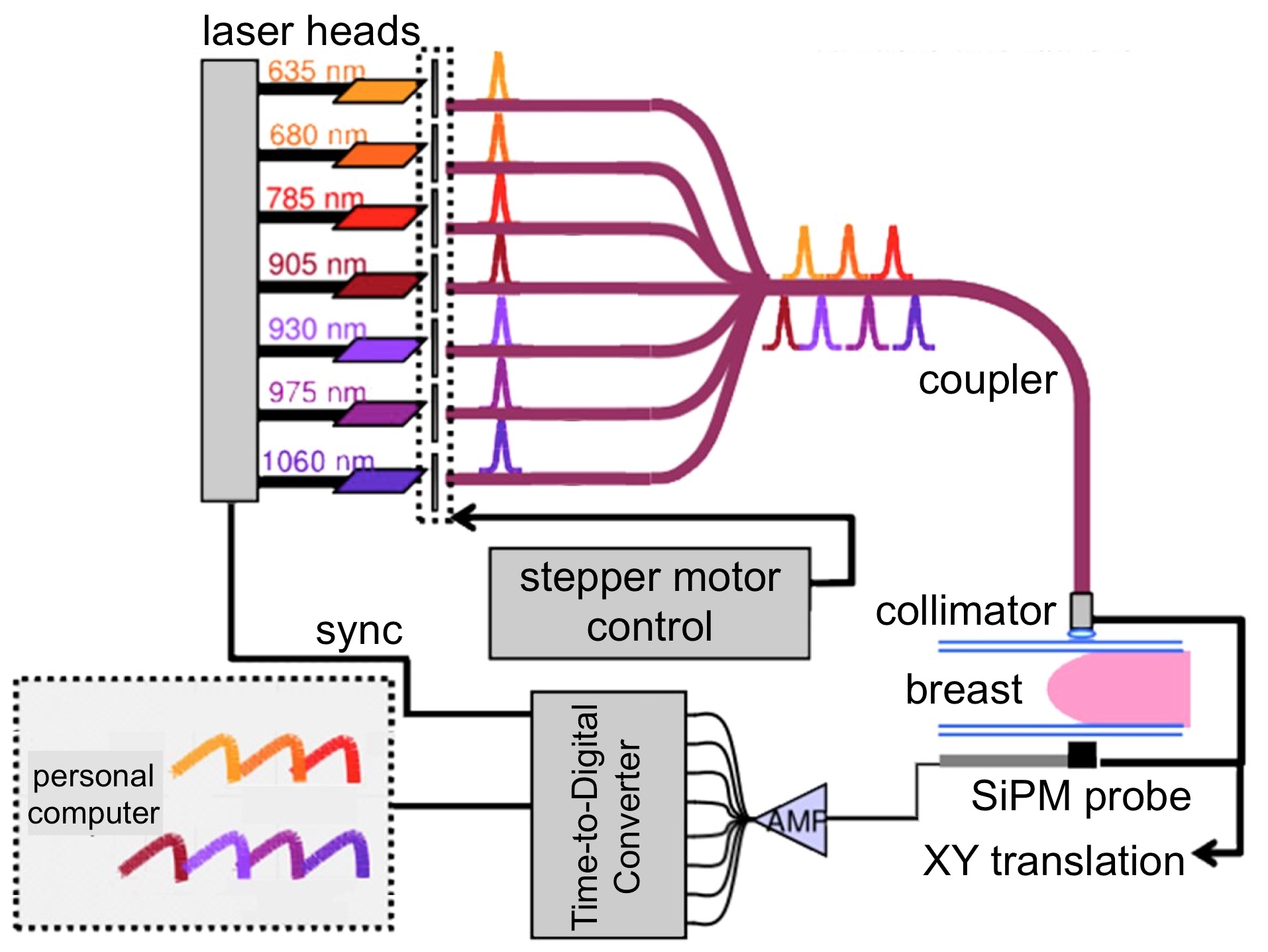 This newly developed instrument is both cheaper and more robust than prior designs based on photomultiplier tubes. Optical imaging techniques have attracted increasing interest over the past few years because both visible and infrared light are sensitive to blood volume and oxygenation. As a breast tumour grows it is characterised by increased vascularisation and high volume of blood. A suspicious area identified by FFDM can then be studied using OM that is able to measure blood volume, oxygenation, lipid, water and collagen content. Collagen is particularly important and has been referred to as a double-edged sword in tumour progression.

Ferocino and his colleagues have acknowledged that a major disadvantage of OM is the poor spatial resolution that has been achieved to date. For any screening technique to be successful, it must be able to detect lesions that are smaller than 10mm in size. The developers therefore don’t believe OM imaging will be a stand-alone screening technique but will find application when combined with other techniques such as FFDM.

Ferocino is encouraged by the potential of OM during pre-surgical chemotherapy: “This technique is able to provide information on the outcome of chemotherapy just weeks after beginning treatment, or possibly even sooner.” This research is funded by the European Union as part of a project called SOLUS, “Smart Optical and Ultrasound Diagnostics of Breast Cancer.”