Shining a Light on the Truth

Bathurst, a village in the Eastern Cape province of South Africa, is the setting for this final blog of 2011. It was here on Wednesday 21 December that The Wiles Gallery hosted an exhibition of paintings by artist-in-residence, Jane Wiles, and her illustrious family members. The guest speaker was Carmel Rickard, a journalist and author, who was visiting from Smithfield in the Free State. 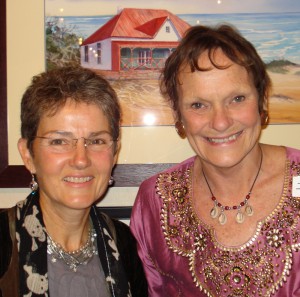 When introducing Carmel, Jane mentioned how they had first met in Pietermaritzburg in the mid-1970s. Jane had just founded an advice office for the Black Sash, a non-violent resistance movement of white women who were opposed to apartheid. Carmel was a first year student at the University of Natal and volunteered her time to an organisation that not only served as an advocate for families affected by apartheid laws but also held regular street demonstrations where “their striking black sashes were worn as a mark of mourning and to protest against a succession of unjust laws.” Their friendship has grown over the intervening years, strengthened more recently by a shared experience: they are both breast cancer survivors.

In her speech Carmel drew attention to the importance of light to an artist, and in Jane’s own words: “I am moved by how the light integrates and disintegrates Nature, especially at change of light, dawn and dusk. The sea, rivers, wind and sky have a way of wiping the slate clean in a way bigger than man can handle. The reflecting backwash of a wave is a perfect example of this, as the wind ripples on the sand.” 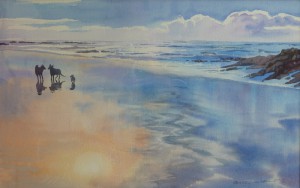 Carmel extended the metaphor of an artist shedding light on her subject to the writer’s quest for the truth – her high school’s motto was veritas – and how it had influenced her own career, especially on matters of the law. This quest is a never-ending one where the spectre of the Protection of State Information Bill, the so-called “Secrecy Bill”, now casts a pall across contemporary South Africa.

As we contemplate the future, and what the year 2012 portends, it is heartening to know that we have among us two artists, both breast cancer survivors, who will continue to shine a light on the truth.