Much of the attention in the press around breast cancer relates to screening mammography, the procedure in which otherwise healthy women undergo X-ray imaging on a regular basis to see if they have breast cancer. This procedure is contrasted with diagnostic mammography in which there is a high suspicion that the woman has an underlying lesion. She may have come to the breast centre because she felt a lump in her breast or because she was referred by the screening clinic.

In order to make a definitive diagnosis, the woman will undergo a series of procedures. First, mammography will be performed and this may then be followed up by further imaging procedures such as ultrasound and MRI. Second, if the radiologist sees a lesion that is indicative of cancer, she or he will perform a biopsy, normally guided by ultrasound or, in those cases when the lesion is particularly small, using stereotactic X-rays. 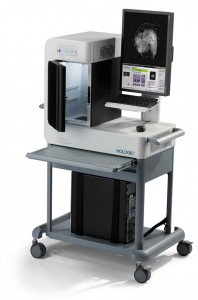 Before sending the excised biopsy specimen off to the pathology department, where it is examined under a microscope, the specimen tissues can be studied using X-rays. While radiographs of mastectomy specimens were performed in the late 19th century – just a few years after Wilhelm Röntgen discovered X-rays – it is just in the past decade, with the advent of digital radiography, that the technology has found widespread application. Because breast cancer is often associated with micro-calcifications – the shape of the individual calcified specks and the form of the clusters can help discriminate between benign and malignant lesions – specimen radiography can therefore improve the diagnostic workflow.

Seen at right is the Trident specimen radiography system recently released by Hologic, one of a number of commercial systems available to clinicians. Not only can these systems be used in the breast imaging clinic, they can also be moved to the operating theatre where the surgeon can confirm, intra-operatively, that there is an adequate margin of tissue removal surrounding the lesion. These systems are self-contained units, able to be wheeled from one site to another, that facilitate the rapid acquisition of high spatial resolution X-ray images (up to 20 line pairs per millimetre) of a relatively large area (up to 150 x 150 mm).

Come to think about it, slot-scanning digital X-rays would be an ideal technology platform on which to design a successful specimen radiography system.