The Mammogram Myth and Other Tales 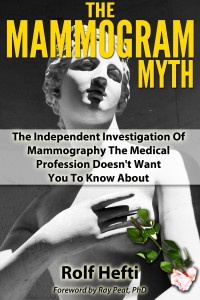 Eighteen months ago we reviewed a book by Peter Gøtzsche entitled Mammography Screening with the provocative subtitle Truth, Lies and Controversy, in which the author, a well-published epidemiologist, argued that millions of women had been seduced into attending screening without knowing it could harm them. Last month saw the publication of an eBook, available on Amazon for just $7.99, entitled The Mammogram Myth, with the equally provocative subtitle The Independent Investigation of Mammography the Medical Profession Doesn’t Want You to Know About. The author Rolf Hefti describes himself as “an independent researcher” who runs the website Supplements and Health.

Unlike Gøtzsche, Hefti has never published anything on mammography before his latest foray into this hotly contested arena. As if to fortify himself, he has reviewed the field in great depth, his bibliography including an incredible 869 separate references. The book itself draws extensively on quotations from many of these references with intermittent commentary by Hefti. One of these appears in his final chapter where he concludes: “The basic pro-mammogram perspective, advocated by traditional medicine, has been primarily established by faulty, biased — and possibly even fraudulent — research, based on vested interests and an ideological agenda.”

One of the key people whose research Hefti frequently cites is John Gofman, a distinguished medical scientist who passed away in 2007 at age 88. Gofman’s PhD thesis described radioactive uranium-232 and he was a key member of the Manhattan Project that developed the first atomic bomb. His team at the University of California, Berkeley made the plutonium that was used in the bomb dropped on Nagasaki. After World War II, Gofman trained as a medical doctor, turning his research focus to coronary disease, and becoming an outspoken critic of nuclear proliferation. 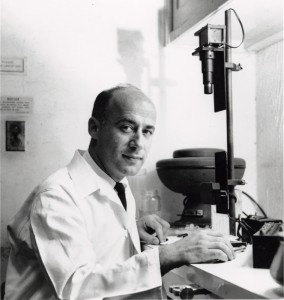 John Gofman in 1950. Copyright UC Berkeley.
In 1996 Gofman published a book entitled Preventing Breast Cancer: The Story of a Major, Proven, Preventable Cause of This Disease, in which he made the astonishing claim that 75% of all breast cancers were caused by women being exposed to ionising radiation from X-rays. As highlighted in a review in JAMA, Gofman’s claim — based on an extensive literature review and certain critical assumptions — was at variance with every other authority, including the National Academy of Sciences and the National Council on Radiation Protection.

Martin Yaffe of Toronto has recently shown that the risk of radiation-induced breast cancer from mammographic screening is not negligible, but this risk is small when compared to the expected reduction in mortality achieved through screening.