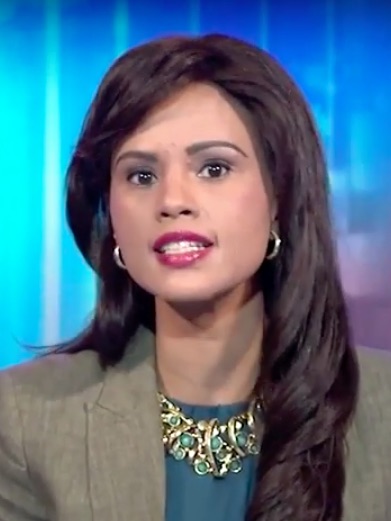 Two weeks ago we received a phone call from Crystal Orderson, freelance producer for Al Jazeera  to say that her company would like to do a story about CapeRay. Without hesitation, we agreed. Partly funded by the House of Thani, the ruling family of Qatar, Al Jazeera has worked hard to dispel the impression that its reporters are biased. For almost two decades, the company has lived by its motto, “The opinion … and the other opinion.”

On Thursday 17th Crystal and her team – correspondent Fahmida Miller (seen at right) and cameraman Dorion Alexander – arrived at Groote Schuur Hospital. On hand to greet them were the two mammographers who had run our clinical trial, Norah Mabota and Nafeesah Karriem, as well as CapeRay’s Roland Baasch, John Harverson, Natasha Steele and Kit Vaughan. Within an hour and a half, our Aceso system had been filmed from every angle, the interviews were complete and the Al Jazeera team was rushing off to its next assignment.

The story about CapeRay and its innovative dual-modality machine called Aceso appeared yesterday during Al Jazeera’s news hours. Peter Dobbie, who until recently was a BBC News anchor, introduced the report: “Doctors in South Africa have developed a breast cancer screening machine that will save time and money. The disease is the leading cause of cancer-related deaths among women worldwide. Fahmida Miller now reports from Cape Town on how there’s new hope this innovation will also save lives”.

Fahmida then described how the system worked, interviewing first Kit and then Norah who said: “It’s a very user-friendly machine, compared to many of the other digital machines that I’ve worked with before. It’s good to see there’s such progress being made, especially when you think of the time that you need to have the mammography and then an ultrasound”. Also interviewed in front of Parliament was Naledi Pandor, Minister of Science and Technology, who stated: “We would like to see greater manufacturing capability in South Africa and developing this machine in our country and then being able to market it in Europe – and we hope eventually to the United States”.

Al Jazeera, which means “The Peninsula” and refers to the company’s location on the Arabian Peninsula, is among the largest news organizations in the world. It reaches 270 million households in over 140 countries and it is estimated that 50 million people viewed yesterday’s report. Needless to say, we were delighted to receive such positive exposure, proving just how extensive is the media’s reach. Watch the full story as it appeared on Al Jazeera by clicking the Play button below.