Tomosynthesis vs Ultrasound in Dense Breasts

A research group based at the University of Genoa in Italy is known by its acronym ASTOUND, which stands for Adjunct Screening with Tomosynthesis or Ultrasound in Women with Mammography-Negative Dense Breasts. Led by radiologist Alberto Tagliafico, they have recently published a paper in the European Journal of Cancer that has important implications for breast screening. Recognising that full-field digital mammography (FFDM) can fail to reveal tumours in women who have dense breast tissue, they wanted to compare how well two adjunctive screening modalities – digital breast tomosynthesis (DBT) and hand-held ultrasound (HHUS) – perform in detecting breast cancer.

This was a multi-centre prospective trial in which 5,300 asymptomatic women attending Italian breast screening services were recruited. All participants had a negative mammogram and, based on the FFDM images, their breast density was judged to be either heterogeneously dense or extremely dense. Each woman then underwent both DBT and HHUS assessments, where the images were independently interpreted by expert radiologists, and the final diagnosis was based on biopsy. The results were instructive.

The adjunctive screening detected 29 cancers, of which 27 were invasive and 2 were ductal carcinoma in situ (DCIS), meaning that FFDM had a false-negative rate of 5.5 per 1,000 women screened. Of the 29 cancers, 12 were detected by both DBT and HHUS, 3 were detected only by DBT and 14 were detected only by HHUS. The image above left illustrates an ultrasound-detected cancer (© EJC). The incremental detection rate was therefore 2.83 per 1,000 for DBT versus 4.90 per 1,000 women screened for HHUS. The false-positive recall rate was 0.3% for DBT which was significantly less than HHUS at 1.0%.

Based on an earlier study by Tagliafico’s research group, Wendie Berg, one of the doyennes of breast screening and a breast cancer survivor, commented: “On the basis of the results from ASTOUND, tomosynthesis still misses a substantial number of invasive cancers in women with dense breasts.” She is therefore a powerful advocate for using ultrasound as an adjunctive modality. 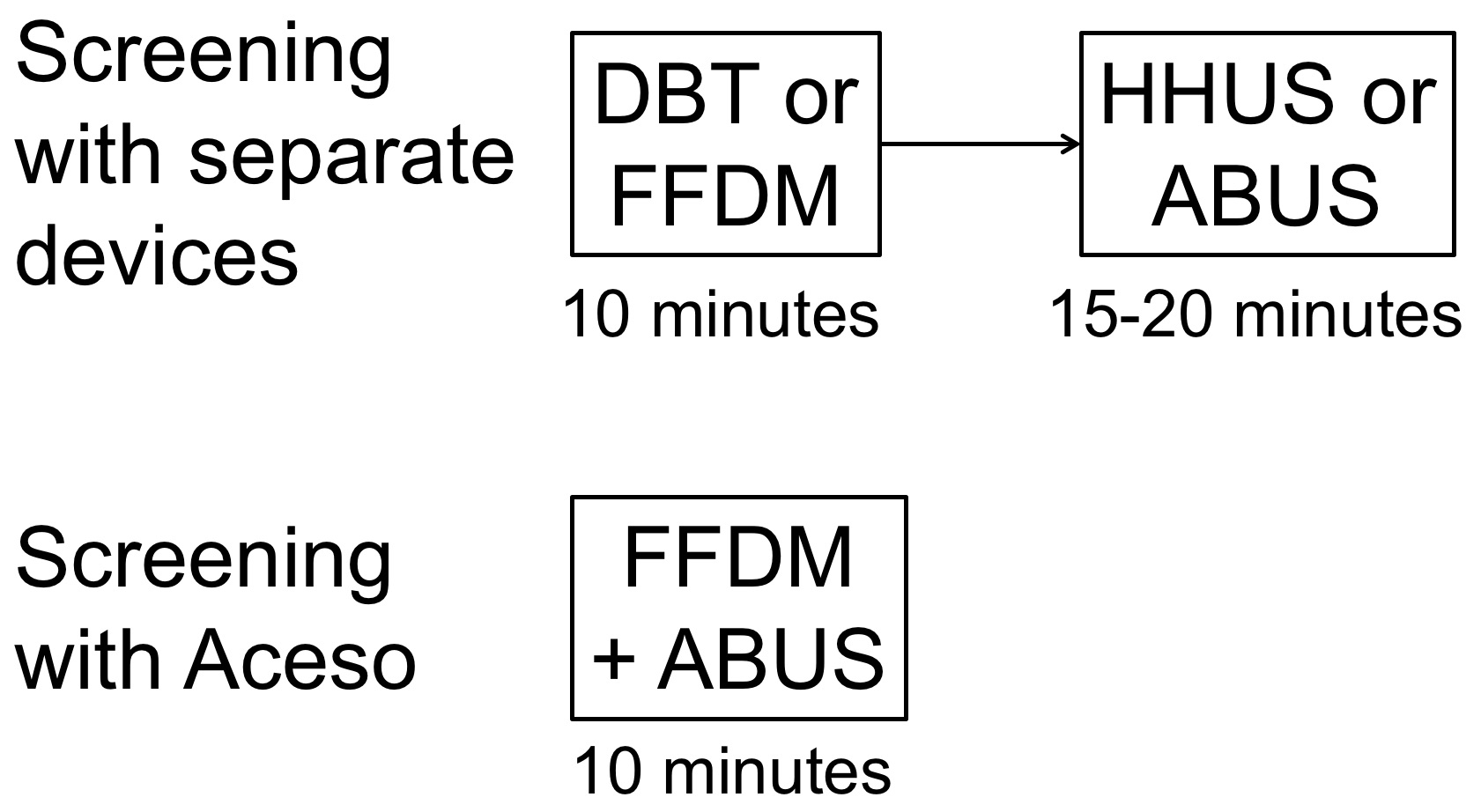 This does beg the question: Which screening strategy would be optimal for women with dense breast tissue? As the upper diagram at right suggests, an ideal set-up would be to have mammography – either DBT or FFDM – followed by ultrasound – either HHUS or automated breast ultrasound (ABUS). However, this approach has three major drawbacks: (1) increased time; (2) extra cost; and, most crucially (3) different orientation and compression of the breast. We would argue that CapeRay’s dual-modality Aceso system solves all three problems.