The annual meeting of the Radiological Society of North America (RSNA) opened this past Sunday, and, for the first time, it is a virtual show. In addition to the scientific talks, medical imaging companies were able to present their products to a worldwide audience. An eagerly anticipated presentation was by Nanox which gave a live demonstration from their company headquarters in Israel. Three months ago, shortly after Nanox listed on the Nasdaq exchange, we asked whether the company was another Theranos, the failed blood-testing business. What have we learned about Nanox since then?

Well, despite damning reports by Citron Research and Muddy Waters, and threatened class action lawsuits by the Klein and Rosen law firms, the Nanox share price has done well (see below right). Although the price dropped steeply to about $24 during September, and was fairly steady through October, it has increased significantly during the past month and is now hovering around $60 a share. The Motley Fool believes this increase was because the market was anticipating a positive presentation by Nanox at RSNA yesterday. 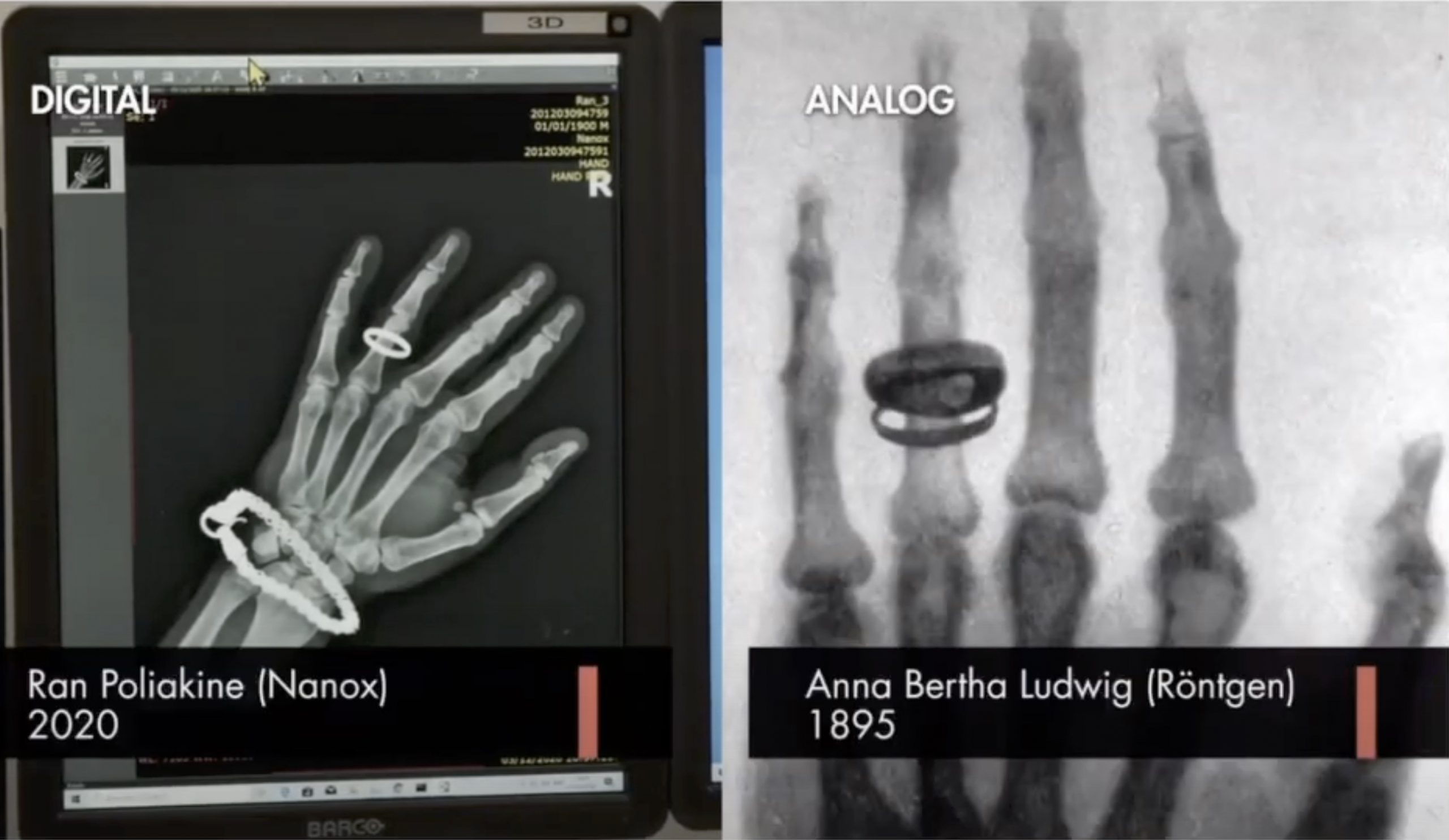 Knowing what was at stake, Nanox’s CEO, Ran Poliakine, pulled out all the stops (click here for the video). First, he described their novel X-ray source technology and, after donning a protective lead apron, had a 2D X-ray taken of his left hand. Then, with a flourish, he compared his image with the famous X-ray of the hand of Wilhelm Röntgen’s wife (seen above). Next, tomosynthesis images of a chest phantom were acquired with the Nanox.ARC prototype, and two radiologists provided commentary on image quality.

A few hours later, LifeSci Advisors hosted a webinar at which Poliakine provided further feedback to the investor community. He described the company’s disruptive business model where they plan to place 5,000 Nanox.ARC units – free of charge – in various countries. Then, using medical screening as a service (MSaaS) model, and charging $14 per scan, they will create a recurring income stream with annual revenues of $400 million based on 20 scans per machine per day.

The success – or failure – of this business model will be directly linked to Nanox’s worldwide partners, and being able to ramp up and deploy their machines in different geographic regions. While their manufacturing partners such as Foxconn and SK Telecom are well established, the same cannot be said for their deployment partners. In South Africa, that partner is Gold Rush for which the available evidence looks extremely dubious, but time will no doubt tell if investor confidence and the share price are justified.