Biomedical engineers from the University of Glasgow have developed an innovative device for the diagnosis of medical conditions using sound-wave technology to produce blood test results in just ten minutes. The university has spun out a company called Saw Dx – which stands for surface acoustic wave diagnosis – and has just received £1.8 million in funding to commercialise a hand-held version of the device. Because the system removes the need for a qualified technician to test the blood sample, the cost of testing could be brought down dramatically, to just £10.

At present, blood tests that are carried out for sexually transmitted diseases such as gonorrhea and infectious diseases like tuberculosis, can take six to ten days before patients receive the results. Dr Julian Reboud, co-inventor of the patented device, said: “This will be a major change in the way that the [healthcare] system works as the process currently takes too long. In the case of infectious diseases that is a problem because it means the infection is still spreading. This new test will allow a patient to go to the clinic, do the test, sit in the waiting room for ten minutes and then be treated.” 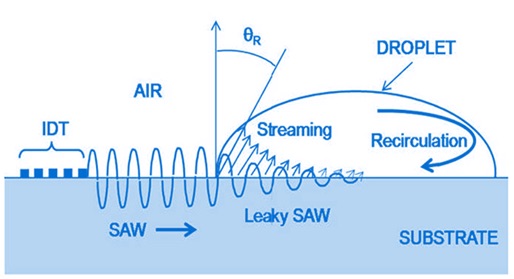 The core of the device is a surface acoustic wave (SAW) sensor that is a micro-electromechanical system (MEMS) that modulates the waves to measure physical phenomena. The device is a disposable microchip that consists of a piezoelectric substrate, and an inter-digitated transducer (IDT) that generates the SAW which then interacts with the droplet of blood (see above left). The system’s functions include fluid movement, mixing, enrichment, and the opening of cells to release DNA. The samples are processed on-chip via an output IDT, enabling results to be available within minutes.

According to a report in The Times, the team anticipates it will take another 18 months to complete the development of their technology that should be available in hospitals and clinics in three years’ time. There is significant commercial potential, with the molecular diagnostic test market worth £3 billion per annum. Professor Jon Cooper, co-founder of Saw Dx, enthused: “Initial clinical tests of early prototypes have produced excellent results. We’re confident that additional funding to refine our design will result in improved performance.”

It will be interesting to see how the technology evolves and whether it can be extended to diagnosing other diseases. This is a positive example of an innovation being incubated within a university laboratory and then spun out for the benefit of the community.